The following article was written for the Orchid Species Bulletin published by the Orchid Species Society, which is based in Brisbane, Queensland in February 2012.
Bear in mind that any cultivation notes refer to the subtropical conditions of Southern Queensland, Australia. 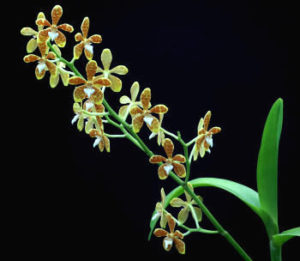 Staurochilus ionosmus (Lindl.) Schltr. was first described by John Lindley as Cleisostoma ionosmum in the Botanical Register in 1846. The specific epithet comes from the Greek ion (violet) and osma (scent) for the sweet perfume. Lindley’s original description was based upon a plant that Hugh Cuming collected from the Philippines for Conrad Loddiges. Unfortunately, the illustration in the Botanical Register is somewhat misleading, as the plant illustrated belongs to a plant that is now known as Trichocentrum, however the flowers are of Src. ionosmus.

Rudolf Schlechter transferred this species to Staurochilus in Die Orchideen in 1914. Usually this species is labelled under the synonym Trichoglottis ionosma (Lindl.) J.J.Sm. The upright to spreading racemes easily distinguish members of Staurochilus Ridl. ex Pfitzer. The long racemes are usually branched with many flowers that are borne away from the stem of the plant. Species of Trichoglottis Blume have 1-4 flowers on short racemes that are carried close to the stem. 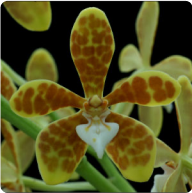 Src. ionosmus is a monopodial epiphytic plant that has terete stems which are usually less than 70 cm tall, but may be up to 1 m long on old plants. Leathery, oblong, arching leaves that are 10-20 (-30) cm long and 2.5-3.5 cm wide are borne along the stem in two alternating ranks. The lower portion of the stem is covered with the dried brown remains of the leaf sheaths. Spreading inflorescences are produced from the leaf axils that are up to 30 cm long. The inflorescences are branched with many (up to 25) flowers that are about 2.5-3 cm across.

The sweetly perfumed flowers of Src. ionosmus are fleshy and stiff with whitish-yellow sepals and petals. The sepals and petals are heavily marked with pale brown to red-brown blotches and have a thin whitish-yellow margin. Its trilobed lip has a thick fleshy, hairy triangular or heart-shaped mid-lobe and is cream to white, marked with about two red-brown stripes near the base.

Src. ionosmus is widely distributed throughout the Philippines, as well as the Ryukyu Islands and Taiwan. It is found from 300-1,300 m altitude. Jim Cootes (1994) suggests that Src. ionosmus “grows best in a pot with large chunks of bark for the roots to wander through. It requires a winter minimum of 10 oC, high humidity, 50% shade and constant air circulation. Regular application of both organic and inorganic fertilisers will help keep this plant in good condition”.