The following article was written for the Orchid Species Bulletin published by the Orchid Species Society, which is based in Brisbane, Queensland in September 2009. It was updated for this website in December 2012.
Bear in mind that any cultivation notes refer to the subtropical conditions of Southern Queensland, Australia. 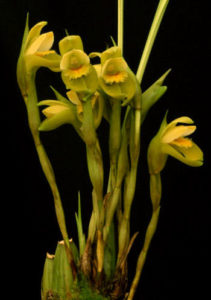 Based upon molecular, cytological and structural evidence, Sudamerlycaste was established for the species that were previously included in Lycaste section Fimbriatae Fowlie. Fredy Archila transferred Lyc. reichenbachii to Sudamerlycaste in the Revista Guatemalensis in 2003. Angela Ryan and Henry Oakeley published it as Ida later the same year in the Orchid Digest.

Several features that distinguish Lycaste from Sudamerlycaste are that the former have flowers that face forwards or towards the light and are day-scented. The lip mid-lobe is often velvety or hairy with entire or crenate margins. Sudamerlycaste have flowers that nod, and when scented, they are fragrant at night. The lip is smooth and the mid-lobe has fimbriate, lacinate or toothed margins. Other features that include the shape of the sepals, petals, lip and viscidium also serve to separate Sudamerlycaste from Lycaste. 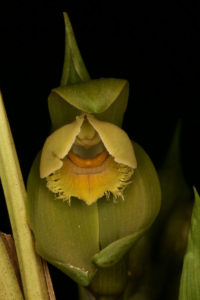 Sud. reichenbachii is a variable plant that grows as a lithophyte, epiphyte or terrestrial in partial shade. The plant produces clustered narrow elongated tapering pseudobulbs that are 8-12 cm long and 2.5-5 cm broad. Smooth, ridged, angular and medium green, each pseudobulb bears 3-4 long-stalked narrow leaves that are up to 65 cm long and 6 cm broad. Six to eight upright inflorescences that are 11-34 cm long can be produced from the base of each of the recently matured pseudobulbs.

The single flowers of Sud. reichenbachii are 3.5-6 cm across and are subtended by a large green floral, cowl-like bract over the ovary. Variable in colour with many colour forms, the sepals are usually medium to olive-green and generally darken slightly with age. The petals are pale green, sometimes with a white edge. Its heavily fimbriate pale green lip has a green to orange callus. Some forms may initially have pale green flowers, which slowly become orange. Uniform dark green, pale orange and green with white-lip forms are also known. The scent is variable and has been reported to be sometimes reminiscent of lily-of-the-valley.

Distributed in Peru, with one report from Colombia, Sud. reichenbachii has been found in montane forests between (1,500-) 2,000-2,800 m altitude.

Sud. reichenbachii requires about 70% shade, a well-drained medium and cool conditions. Maintain high humidity with good air circulation and water it regularly. Plants should not be allowed to remain dry for long periods.