The following article was written for the Orchid Species Bulletin published by the Orchid Species Society, which is based in Brisbane, Queensland in July 2009.
Bear in mind that any cultivation notes refer to the subtropical conditions of Southern Queensland, Australia. 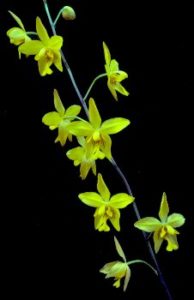 Spathoglottis affinis de Vriese is perhaps better known under the synonym of Spa. lobbii Rchb.f. as it was labelled at the June 2009 meeting. Gunnar Seidenfaden (1986) realised that the flowers of Spa. lobbii from Thailand have a longer and narrower claw at the base of the lip, otherwise they are identical to Spa. affinis. Hugo de Vriese described Spa. affinis in Illustrationes Orchidacearum Indiae Orientalis in 1855. The specific epithet comes from the Latin affinis (neighbouring, allied to).

Spa. affinis is a terrestrial or lithophytic plant. The pseudobulbs are found below the ground and are flattened and of irregular shape. Each pseudobulb bears 2-4 linear-lanceolate apical leaves that are up to 30 cm long and 2-3 cm wide. The pleated leaves are deciduous and are often not on the plant during the flowering period. Finely hairy inflorescences are produced from nodes at the base of the leaf that are usually much longer than the leaves. 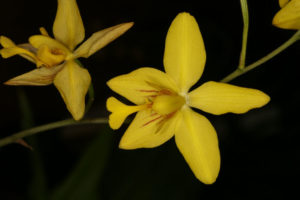 The upright inflorescences of Spa. affinis are about 20-30 (-70) cm tall and bear about 15 well-spaced flowers that open progressively. Usually there are 4-6 blooms open towards the apex of the raceme at any one time. The blooms are arranged around the rachis to face in all directions. About 2.5-3 cm across, the bright yellow to sulphur-yellow flowers have the lateral sepals sometimes faintly streaked or veined with red. The short rounded fleshy, twin knob-like calli at the base of the lip are mottled red to purple.

A widespread species, Spa. affinis is distributed from Vietnam, Laos, Myanmar, Thailand, Peninsular Malaysia to Java and possibly Borneo. It grows in open rocky habitats at elevations between 600-1,000 m elevation. Spa. affinis is a species adapted to a seasonal climate, with only the underground pseudobulbs surviving through the dry season. In cultivation this dry rest must be observed for very little water is needed when the plant is leafless.

Spa. affinis requires 50-70% shade, a well-drained medium and good air circulation. Water regularly while it is actively growing to keep the potting medium evenly moist and maintain high humidity. Watering frequency should be reduced after the leaves have been shed. After flowering has finished, very occasional misting or water can be given to prevent the pseudobulb from excessive shrivelling. Repot annually as new growth commences.