The following article was written for the Orchid Species Bulletin published by the Orchid Species Society, which is based in Brisbane, Queensland in November 2004.
Bear in mind that any cultivation notes refer to the subtropical conditions of Southern Queensland, Australia. 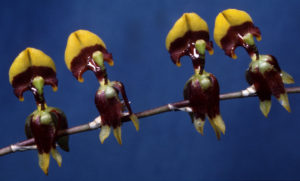 Sigmatostalix eliae Rolfe is a member of tropical American genus that belongs to the Oncidieae tribe, which we rarely see in south-east Queensland. Robert Rolfe described Sgmx. eliae in the Bulletin of Miscellaneous Information, Royal Botanic Garden, Kew in 1908.

A miniature plant, Sgmx. eliae has clustered ovoid-oblong, flattened pseudobulbs that are 2-3 cm long and 1-1.5 cm broad. Sheathed by 1-2 pairs of alternating leaf-bracts at the base, the pseudobulbs bear one (sometimes two) oblong to narrowly elliptic-oblong leaf at the apex. Folded together at the base, the thin leaves are 5-11 cm long and 8-15 mm broad. Dark green on the upper surface, the underside of the leaves and exposed portion of the pseudobulbs is reddish-purplish. Long slender inflorescences that are 17-25 cm long are produced from the base of the maturing pseudobulb. The upright to spreading raceme bears 10-18 alternating flowers at 1 cm intervals.

Non-resupinate with the lip uppermost, the flowers of Sgmx. eliae all face one side and look like lined-up soldiers. The flowers have reflexed pale green to yellow sepals and petals that are marked with mahogany-red to red-brown in the lower two-thirds. Its stalked semi-circular lip is bright yellow with the basal half mahogany-red to brown. The long greenish column is encircled or spotted by red to brown lines.

Distributed on the eastern slope of the Andes from eastern Colombia, Ecuador and northern Peru, Sgmx. eliae is an intermediate- to cool-growing species. It grows as an epiphyte in wet montane forests. Plants require about 70% shade and a small container with a well-drained medium. Good air circulation is important at all times with high humidity. Water it regularly so that the roots never remain dry for long periods.