The following article was written for the Orchid Species Bulletin published by the Orchid Species Society, which is based in Brisbane, Queensland in July 2012.
Bear in mind that any cultivation notes refer to the subtropical conditions of Southern Queensland, Australia. 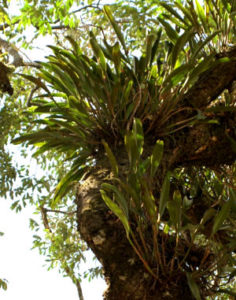 Restrepiella ophiocephala (Lindl.) Garay & Dunsterv. was first described by John Lindley as Pleurothallis ophiocephala in the Botanical Register in 1838. Lindley’s description was based on plants collected from Mexico and sent to him from Messrs Loddiges of Hackney and Mr Barker of Birmingham. The specific epithet was derived from the Greek ofis (snake) and cephalos (head) in reference to the flowers which resemble the open jaws of a snake’s head.

Leslie Garay and G. C. K. Dunsterville transferred this species to Restrepiella in Venezuelan Orchids Illustrated in 1966. They placed 7 species within this genus, however nowadays the genus is recognised as being monotypic with Rpa. ophiocephala as the sole species. The other species now belong to Restrepiopsis which is more closely allied to Octomeria and Pleurothallopsis. Restrepiella differs from the related genera Restrepia in lacking hair-like attachments on the lip and in having a mobile lip; and from Pleurothallis in having 4 pollinia rather than two pollen-masses. 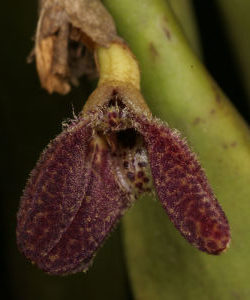 Rpa. ophiocephala is a medium sized robust sympodial epiphyte with clustered erect stems that are 8-23 cm long. The stout stems have a tubular bract sheathing the middle and bear a stalked oblong-lanceolate, leathery leaf at the apex that is 8-18 cm long and 1.2-4.3 cm wide. Up to 4 clustered inflorescences are produced successively from the base of the leaf. Each inflorescence bears one flower that is subtended by large papery bracts. Downy or softly haired on the outer surface, the flowers are variable in colour and are 1.4-2 cm long.

The flowers of Rpa. ophiocephala may vary from rarely pure yellow to pale yellowish-brown and are variably spotted with dull purple to nearly solid maroon-purple. The elliptic dorsal sepal is fused at the base to the lateral sepals and the lateral sepals are joined almost to the apex. Its small elliptic petals are ciliate along the margin. In some forms the flowers do not open very widely while others are almost flat. The flowers are strongly and unpleasantly scented and last for about 4 days. Blooms may be produced sporadically over a period of several months.

Rpa. ophiocephala is distributed from Mexico, Belize, Guatemala, El Salvador and Costa Rica where it is found in riverine forest at low altitudes between 70-200 m. A warm-growing species, Rpa. ophiocephala appears to be one of the easy-to-grow and flower pleurothallids for subtropical regions. Plants require around 70% shade, high humidity with good air circulation. Grow it in a small pot in a well-drained medium and keep the roots evenly moist all year round. Suitable potting media include fine to medium bark, sphagnum moss or a combination of perlite with peat moss. Plants grown in small pots may tend to be top-heavy so terracotta pots can be an advantage.