The following article was written for the Orchid Species Bulletin published by the Orchid Species Society, which is based in Brisbane, Queensland in October 1997.
Bear in mind that any cultivation notes refer to the subtropical conditions of Southern Queensland, Australia. 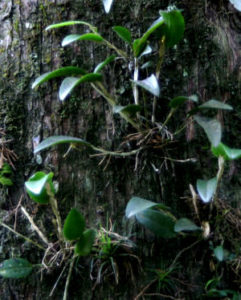 Restrepia muscifera (Lindl.) Rchb.f. ex Lindl. seems to be the correct name for plants commonly labelled as Restrepia xanthopthalma Rchb.f. The species was first described by John Lindley in 1842 as Pleurothallis muscifera in Edwards’ Botanical Register based upon a Guatemalan collection by George Ure Skinner. The younger Reichenbach subsequently transferred it to Restrepia in Folia Orchidaceae in 1859.

It is apparently a frequently encountered and variable species with a wide distribution from Mexico, throughout Central America to the Western Cordillera of Colombia.

Rstp. muscifera is variable in plant size with erect ramicauls (pleurothallid stems) that are 2.5-17 cm long, which are enclosed by 4-10 thin, whitish sheaths. The erect, elliptic-ovate, thick leathery leaf is 3.5-8 cm long and 1.5-3.5 cm wide and is often suffused with purple on the underside. Solitary flowers are produced successively in spring. They are borne in a series at the base of the back of the leaf, on a slender 7-20 mm long peduncle. 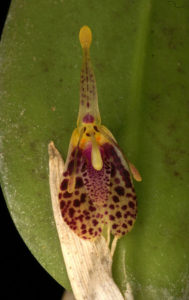 The erect dorsal sepal of Rstp. muscifera is narrowly triangular with a thickened club-shaped tip and is white, yellow or rose, more or less spotted with purple. Its lateral sepals are joined to near the apex and is also white, yellow or rose, variously suffused, dotted, spotted and blotched with red-purple. The narrow petals also have thickened club-shaped apices and are white to yellow or rose, often with a purple spot at the base. The oblong-ovoid lip is again of the same variable combination of colours and markings.

Being such a variable and widespread species it is no wonder that Rstp. muscifera has quite a number of synonyms as no two populations are similar in size, shape and colour. Carlyle Luer (1996) says that broad-leaved forms appear distinctly different from narrow-leaved forms, but the same variations of the flowers occur in both forms.

Rstp. muscifera is distinguished from other species of the genus by the thick leathery ovate, more or less acute leaves. Also the short peduncles bear the flower close to the base of the leaf on the underside. In addition the dorsal sepal and petals are distinctly club-shaped with the petals basically decurved.