The following article was written for the Orchid Species Bulletin published by the Orchid Species Society, which is based in Brisbane, Queensland in December 2006.
Bear in mind that any cultivation notes refer to the subtropical conditions of Southern Queensland, Australia.

Phalaenopsis parishii Rchb.f. is a miniature plant that does not take up much room in any species collection. Samuel Parish (1838-1928) sent plants from Myanmar (Burma) to Messrs Low & Co. in 1864. Heinrich Gustav Reichenbach described it in Botanische Zeitung in 1865, naming it for its discoverer.

Several short arched inflorescences are produced from nodes opposite the leaf base. The racemes of Phal. parishii are 5-14 cm long and carry 3-6 (-10) flowers that are large for the plant size. The flowers are about 2 cm across and have white to yellowish sepals and petals that are usually reflexed. The lip mid-lobe has a solid deep violet to amethyst or wine-coloured disc and very small yellow side-lobes that are spotted with purple or light brown. Its column is spotted with dark brown at the base. Opening together, the crowded flowers last for 3-4 weeks. 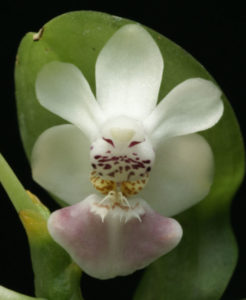 Phal. parishii is distributed in the eastern Himalayas (Assam) and neighbouring Myanmar(Moulmein) and Thailand. In Thailand, this species has been collected at around 500 m altitude. In Myanmar, Phal. parishii grows overhanging streams on tree branches that are covered with moss where it is hot and moist during the growing season. In the dry season plants often lose their leaves. It is a warm-growing species in its natural habitat, with summer temperatures ranging from 24-32 oC and winters between 19-35 oC.

Mounts such as cork bark or hardwood seem to be suitable hosts for Phal. parishii. Alternatives could be a small basket or pot using a fast draining medium. Plants are best kept moist during the summer with a drier 3-4 month rest during winter. It is best however not to allow it to become too dry during the cooler months. A winter minimum of 15oC is recommended but it will withstand temperatures down to 10oC at night for short periods provided it is also dry. Dappled light such as 70% shading, rather than heavy shade is preferred.