The following article was written for the Orchid Species Bulletin published by the Orchid Species Society, which is based in Brisbane, Queensland in October 2010.
Bear in mind that any cultivation notes refer to the subtropical conditions of Southern Queensland, Australia. 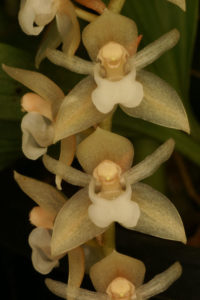 Pholidota chinensis Lindl. was described by John Lindley in the Journal of the Horticultural Society, London in 1847. Lindley gave it the specific epithet from the country China and the Latin suffix –ensis (origin or place).

Pho. chinensis is an epiphytic or sometimes lithophytic plant with pseudobulbs that are borne along a rhizome at 0.5-2.5 cm intervals. The spindle-shaped to narrowly ovoid-oblong pseudobulbs are 2.5-8 cm long and 5-23 mm in diameter. Each pseudobulb bears two stalked obovate-elliptic to sub-oblong leaves at the apex. Its pleated leaves are 5-22 cm long and 1.5-6 cm across. Racemes emerge from between the leaves of the newly developing growth. The pendulous racemes are 6-17 (-38) cm long and bear 10-20 flowers in two ranks.

The flowers of Pho. chinensis open quickly in succession along a zigzag rachis so that they are all open at the same time. The flowers open widely to about 1.5 cm across and are fragrant or sometimes scentless. They are uniformly greenish-white, whitish or white with a creamy-white lip. Floral bracts next to each flower soon become brown after the flowers open. 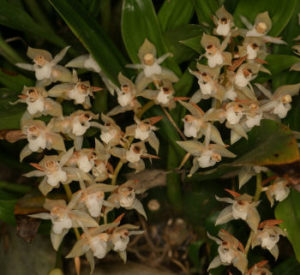 Pho. chinensis is distributed in southern China as well as Myanmar, and Vietnam. Pho. chinensis grows as a lithophyte or epiphyte in the shade or out in the open. It inhabits moist to wet areas from 500-1,700 m altitude.

This species seems to be easy to grow and flower in the southeast Queensland region. It will often develop into specimen plants if conditions are to its liking. It grows well under 60-70% shade with plenty of air movement and regular water during the growing season. Any well-drained potting medium can be used, such as a bark-based medium, sphagnum moss or a perlite/peat moss combination. During its rest period it can be allowed to become a little drier but plants should not be allowed to remain dry for long periods. I recommend a winter minimum of 12 oC.