The following article was written for the Orchid Species Bulletin published by the Orchid Species Society, which is based in Brisbane, Queensland in November 2010.
Bear in mind that any cultivation notes refer to the subtropical conditions of Southern Queensland, Australia. 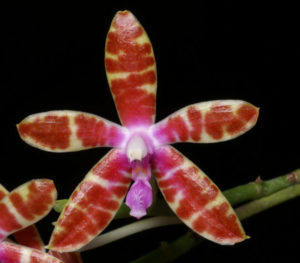 Phalaenopsis bastianii O.Gruss & L.Röllke is also known in horticultural circles as Phal. deltonii Hort., which is an unpublished name. Closely related to Phal. mariae Burbidge ex Warner & Williams, Phal. bastianii was exported from the Philippines in the 1960’s and thought to be a naturally occurring hybrid. Distinct species status was concluded after seedlings were raised and flowered, which showed little variation as would be expected for a hybrid. Olaf Gruss and Lutz Röllke described Phal. bastianii in Die Orchidee in 1991. The specific epithet honours Bastian Röllke, son of one of the authors.

Phal. mariae has laxly pendent inflorescences with branches that are borne at sharp angles less than 30o. The floral segments of Phal. mariae have strongly revolute margins giving the species poor flower shape. In addition, Phal. mariae has a reputation for being difficult in cultivation. It is prone to bacterial crown rot and thus can be short-lived. 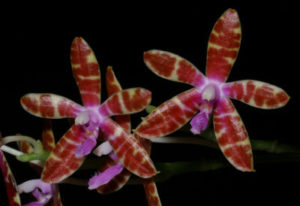 An epiphytic plant, Phal. bastianii has short stems with 2-10 obovate-elliptic, alternating two-ranked leaves at the apex. The pale green leaves are 15-23 cm long and 5-7 cm broad. Erect to arched inflorescences that are 15-50 cm long are produced from nodes opposite the base of the leaves. The inflorescence can have short branches that are formed at right angles, which carry 2-7 flowers. Even though its lip is close to Phal. mariae the flowers of Phal. bastianii are flat. Old inflorescences on healthy plants will continue to branch and flower from the ends for a number of years. New plantlets can form at the nodes of the inflorescences while they are still green. These can be removed and potted up once a number of roots have begun to form. 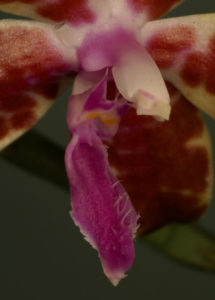 Highly variable in colour, the glossy flowers of Phal. bastianii are 3-4 cm across with greenish white to cream or pale yellow sepals and petals that have large blotches of red-brown to purple-brown throughout. Its lip is mauve to purple with pinkish white to rose-purple side lobes. The side lobes have yellow or orange ridges and the column and anther cap are white. Faintly and pleasantly scented, the flowers of Phal. bastianii usually open together and are long-lived.

Phal. bastianii seems to be easy to grow and flower in southeast Queensland without the need for winter heat. It can be grown in pots or baskets with a well-drained medium. Bright light such as 70% shade, together with warm to intermediate conditions and good air circulation are important. During winter temperatures down to 10oC seem to be tolerated provided that the leaves are dry at night. Plenty of water and liquid fertiliser can be given during the warm months while the root tips are green, with much less in winter.