The following article was written for the Orchid Species Bulletin published by the Orchid Species Society, which is based in Brisbane, Queensland in April 1997.
Bear in mind that any cultivation notes refer to the subtropical conditions of Southern Queensland, Australia. 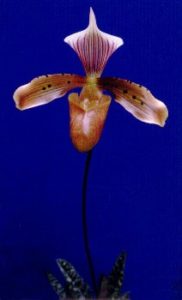 Paphiopedilum tonsum (Rchb.f.) Stein (Rchb.f.) Stein was first described by Heinrich Gustav Reichenbach as Cypripedium tonsum in the Gardeners’ Chronicle in 1883. He based his description on a plant collected by Charles Curtis and sent back to Veitch & Sons of Chelsea. The specific epithet tonsum means shaven or shorn and refers to the lack of hairs on the petals. Berthold Stein transferred it to Paphiopedilum in Orchideenbuch in 1892. Paph. tonsum is found frequently in north and central Sumatra where it grows in deep humus in lower montane forests between 1,000-1,800 m elevation.

Paph. tonsum is quite a variable species both in the plant as well as in the flower size, petal shape and spotting, and also the shape of the staminode. It has oblong-elliptic leaves that are up to 20 cm long and 5 cm across, which are pale to dark green, mottled with darker green. Many plants of this species are spotted or flushed with purple beneath the leaves. The inflorescence is up to 38 cm tall and bears a single glossy flower that is up to 12-14 cm across in autumn. The flower has a pinkish white dorsal sepal veined green and dark purple. The outstretched petals are olive to pale yellow-green with darker green veins and may sometimes be flushed dull purple, with a few black warts in the inner surface. The lip is green to olive-brown with pink flushing and has darker brown or maroon veining. 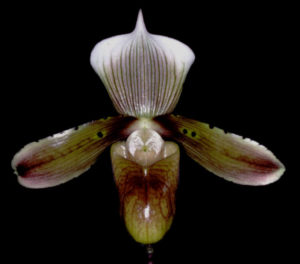 I find Paph. tonsum to be easy to grow in the Brisbane area as it does not seem to mind our winter conditions without artificial heat. Lance Birk (1983) says that this species requires a winter rest to bloom. He indicates that it flowers in spring whereas Catherine Cash (1991) says that it flowers in winter. It seems to me that various cultivars can be found flowering from autumn through to spring.