The following article was written for the Orchid Species Bulletin published by the Orchid Species Society, which is based in Brisbane, Queensland in December 2006.
Bear in mind that any cultivation notes refer to the subtropical conditions of Southern Queensland, Australia. 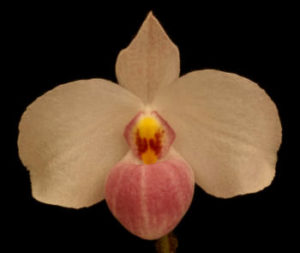 Paphiopedilum delenatii Guillaumin was described by André Guillaumin in Bulletin de la Société Botanique de France in 1924, based upon plants collected in northern Vietnam (Tonkin). He named the species for M. Delenat of Paris, who was the first to flower it in European cultivation. Up until recently all of the plants in cultivation have been the result of the selfing of the original plant in the collection of the French Nursery of Vacherot & Lecoufle. Around 1990 or 1991 Paph. delenatii was rediscovered near Nha Trang, Vietnam. Despite CITES, large numbers of plants were exported to Taiwan, Japan, Europe and the U.S.A.

Paph. delenatii is a terrestrial plant that is rather attractive even when not in flower. It has clustered growths that consist of 6-7 two-ranked alternating, elliptic to elliptic-oblong leaves that are up to 11 cm long and 3-4 cm broad. The leathery leaves are mottled dark and pale green on the upper surface, with the underside heavily spotted with purple. Erect inflorescences emerge from the centre of the matured growths, which are up to 22 cm long. The inflorescence carries one, sometimes two or rarely three flowers at the apex. The peduncle is purple and is covered with white hairs. 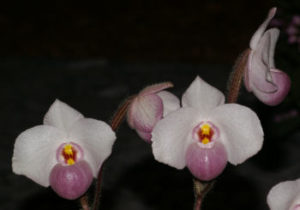 The attractive flowers are 7.5-8 cm across and are lightly scented like sweet peas. The sepals and petals are white, pink or pale pink, with the sepals often darker on the outer surface. Its pouch-shaped lip is often darker but can vary from white, pale pink or very dark rose. The staminode of Paph. delenatii is white with red and yellow markings. Guido Braem described the pure white form as f. albinum in The Genus Paphiopedilum Natural History and Cultivation in 1998. This form lacks any red-purple pigmentation in the leaves, inflorescence and flower.

In keeping with its natural habitat, Paph. delenatii requires a well-drained potting medium. Plants are intolerant of soggy mix, resulting in quick root loss. Shading of 70% and good air circulation is important at all times. During the warmer months plants should not be allowed to dry out for long periods. Regular watering should be given and the potting medium allowed to become nearly dry before the next watering. In winter the watering frequency can be reduced further, with water applied in the morning to prevent the plant becoming too dry. Some growers report that a distinct rest with long hours of sunshine are needed for Paph. delenatii to flower.