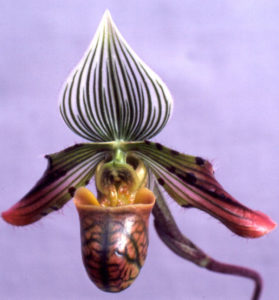 Paphiopedilum venustum (Wall. ex Sims) Pfitz. is quite a variable species in both plant and flower colour. Nathaniel Wallich first discovered this species in Sylhet (now Bangladesh) in 1816. John Sims described it as Cypripedium venustum in the Botanical Magazine in 1820. The specific epithet comes from the Latin venustus (beautiful, graceful) for the flower. Ernst Pfitzer transferred it to Paphiopedilum in Pringsheim, Jahrbücher für Wissenschaftliche Botanik in 1888.

Paph. venustum is a lithophytic plant that has clustered stems, which bear 4-5 two ranked elliptic to oblong-elliptic leaves. Tessellated dark green and grey-green above, the leaves are densely spotted purple on the underside and are 10-25 cm long and 3-5.5 cm broad. The upright apical inflorescence is 10-23 cm long and bears a single flower (rarely two) that is 8-9 cm across. 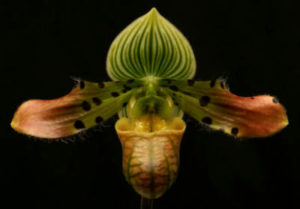 The white sepals of Paph. venustum are longitudinally veined green. Its white petals are veined green with a few large black-maroon warts and the apical half is flushed orange to red or purple. The yellow helmet-shaped lip is tinged brown to red or purple and marked with web-like green veins giving it a marbled appearance. Paph. venustum f. measuresianum (Hort.) Braem is the albino form with white to yellow and green flowers that lack any red, brown or purple pigments in the leaves and flowers. Paph. venustum f. aureum Hort. are the near-albino forms that show some faint traces of pigmentation in the flowers.

Distributed in northeast India (Meghalaya), northeast Bangladesh, Sikkim and Bhutan, Paph. venustum is found between (60-) 300-1,350 m altitude. Plants grow in shade at the base of cliffs or on cliff ledges near streams, in humus-rich gullies in deep composted leaf litter at the base of trees. Paph. venustum is easy to grow in the southeast Queensland region. Plants require about 70% shade with a well-drained medium and good air circulation. Water it frequently and maintain high humidity during the warmer months with a reduction in frequency during winter while it is not actively growing. Plants should not be allowed to remain dry for long periods.