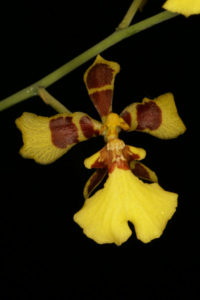 Oncidium cajamarcae Schltr. was described by Rudolf Schlechter in Repertorium Specierum Novarum Regni Vegetabilis Beihefte in 1921. The specific epithet was derived from the Peruvian department Cajamarca, for where this species was first discovered. 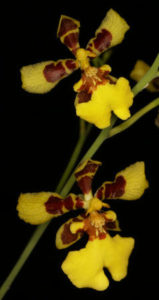 A terrestrial or lithophytic plant, Onc. cajamarcae has clustered ovate to pear-shaped, strongly laterally compressed smooth, 2-edged pseudobulbs that are 6.5-11 cm long and 3.5-5 cm broad. The pseudobulb is sheathed by several overlapping basal bracts, with the uppermost ones bearing leaves. Each pseudobulb bears a single apical strap shaped leaf that is 30-40 cm long and 3-4 cm broad. An upright panicle that may be 100-130 cm long is produced from the inner sheathing bract of the recently maturing pseudobulb. The 1-3 branched panicle bears 5-10 flowers on each of the limbs.

The scentless flowers of Onc. cajamarcae are about 3.5 cm across and open successively from the base of the branches, so that most of the blooms are open together. Its yellow sepals and petals are banded or blotched with red to red-brown in the lower half. The 3-lobed yellow lip is also banded or blotched with red to red-brown around the white callus, which is is usually marbled with pale brown.

Endemic to Peru, Onc. cajamarcae grows terrestrially and is often found under low open shrubs with its flowers above them. Plants have been found between 2,000-3,000 m altitude. A cool-growing plant, Onc. cajamarcae requires about 70% shade, a well-drained medium and cool conditions. Maintain high humidity with good air circulation at all times and water it regularly. Plants should not be allowed to remain dry for long periods.