The following article was written for the Orchid Species Bulletin published by the Orchid Species Society, which is based in Brisbane, Queensland in August 2008.
Bear in mind that any cultivation notes refer to the subtropical conditions of Southern Queensland, Australia. 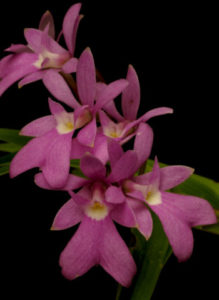 The genus Oerstedella was named in honour of the noted collector of Mexican plants, Anders Sandoe Oersted. Eric Hágsater resurrected Oerstedella in Orquidea (Méx.) in 1981 due to differences that include the column structure. More recent work involving DNA data analysis shows that Oerstedella is embedded within the large genus Epidendrum. In order to maintain Oerstedella as a distinct genus, Epidendrum would need to be divided, which Eric Hágsater has been reluctant to do. 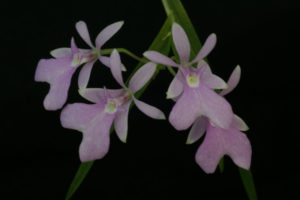 Oe. centropetala is an epiphytic plant that has slender reed-like stems that are up to 60 cm tall. Simple or often branched, the stems are about 3-4 mm in diameter and are clasped by leaf sheaths that are minutely papillose or tuberculate with purplish-red in longitudinal lines. Alternating acute linear-lanceolate leaves that are 2-9 cm long and 2-8 mm broad are borne in two ranks mainly toward the apex of the new growths. With age, the stems become leafless from the base. Inflorescences are borne at the apices of the stems and bear 3-10 flowers that are about 15 mm across. Long-lived, the showy flowers of Oe. centropetala are pink to pale lilac rose in colour and last for about 6 weeks.

Oe. centropetala is a warm to intermediate-growing species native to Nicaragua, Costa Rica and Panama, where it grows at low elevations in wet montane forests on the Pacific slopes of the cordilleras up to 1,400 m altitude. Here wet and dry seasons succeed each other. 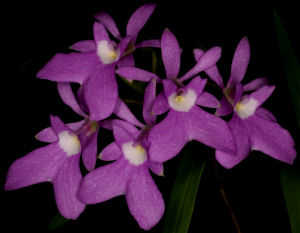 Carlos Fighetti (1995) says that Oe. centropetala is easy to grow and it can be mounted on tree-fern slabs, grown in wooden baskets with osmunda or planted in clay containers filled with sphagnum moss. He uses the latter method and says that they do very well under intermediate temperature conditions (15oC minimum) together with phalaenopsis, but that they are hung higher to receive better light. He maintains the humidity around the plants to about 60 percent and provides them with gentle air movement. His plants are fed with a general-purpose fertilizer (but one that does not contain urea) every time they are watered. They are repotted every summer, and he says that Oe. centropetala does better when slightly pot-bound. The thick white roots are 4 mm across and have green tips when actively growing and I suspect that they resent being continually wet. By keeping the plants pot-bound there would be less chances of having the root-ball overly wet.

Fighetti says that the genus can be easily propagated vegetatively during the summer when the roots are in active growth by either detaching the new plantlets from the old reed stems or by cutting the rhizomes at the base. He warns that when severing the rhizomes; make sure that each division has sufficient roots. Also he emphasises of course, the use of a sterilised cutting tool for dividing or severing each plant.