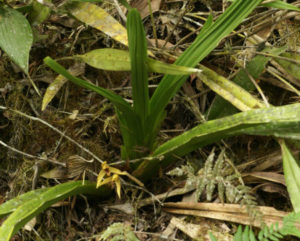 Recent DNA data analysis confirms that Maxillaria is grossly polyphyletic (contains more than one common ancestor). Based on these studies, together with anatomical and morphological evidence, Isidro Ojeda and German Carnevali transferred Max. nasuta to the genus Nitidobulbon in Novon in 2008. This small genus was referred to as the “Maxillaria nausta clade” and comprises 3 species. The generic name was derived from the Latin nitidus (shiny) and bulbus (bulb) for the shiny, varnished texture of the pseudobulbs.

Species of Nitidobulbon have large oblong shiny smooth pseudobulbs that are subtended by 4-6 leafy sheaths and a single apical leaf (rarely two). Single-flowered inflorescences are produced from the axils of the subtending leaves and are generally about twice as long as the pseudobulb. The flowers don’t open widely and are somewhat cupped. They have rigid sepals that have abundant longitudinal fibres. In addition, the flowers have a very short column-foot and lip that is usually reflexed at the tip. Its lip callus is tongue-shaped and secretes a resin-like substance. 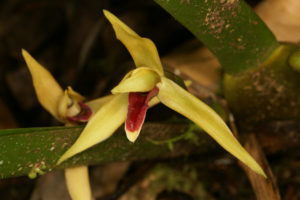 The single flowers of Ntb. nasutum emerge from within the leaf sheaths, or sometimes from the old leafless pseudobulbs. The flowers are 4.5-6.5 cm across and are variable in colour. Usually the leathery flowers have yellow-green sepals that may have some light maroon suffusion on the outside. The petals are similarly coloured as the sepals and the lip has a yellow apex with deep maroon to strawberry red on the upper surface and the green-brown underside is suffused maroon. Towards the base on the centre of the lip is a shiny-wet flat callus that is covered with a sticky resin.

Ntb. nasutum is the most widespread species of the genus. It ranges from southern Mexico, Guatemala, Costa Rica, Venezuela, Colombia and Bolivia. It grows on the larger branches and trunks of trees in evergreen wet forests between 150-1,500 m altitude. A warm to intermediate-growing plant, Ntb. nasutum requires about 70-80% shade, high humidity and good air circulation. Grow it in a well-drained medium and water it regularly as it should not be allowed to remain dry for long periods. Several growers have reported problems with cold winter temperatures where the leaf tips have quickly turned pale brown. I recommend a winter minimum of 12oC, with overhead protection for growers in southeast Queensland.