The following article was written for the Orchid Species Bulletin published by the Orchid Species Society, which is based in Brisbane, Queensland in April 1999.
Bear in mind that any cultivation notes refer to the subtropical conditions of Southern Queensland, Australia. 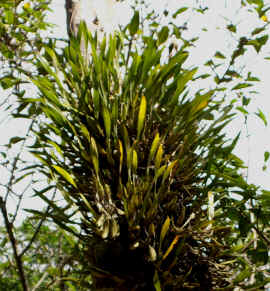 Nidema boothii (Lindl.) Schltr. may be known under its synonym of Epidendrum boothii, a name that is still sometimes seen in cultivation. John Lindley described it firstly in the Botanical Register in 1838 as Maxillaria boothii, based upon a plant collected by George Ure Skinner from Guatemala. Lindley named it in honour of his friend William Beattie Booth who provided the information about this species. Rudolf Schlechter transferred it to Nidema in Feddes, Repertorium Specierum Novarum, Beihefte in 1922.

Nid. boothii is widespread in Central America and northern South America, being found from Mexico to Panama and also Cuba and Suriname. Its habitat is the tropical moist forests and scrub up to 1,500 m elevation. 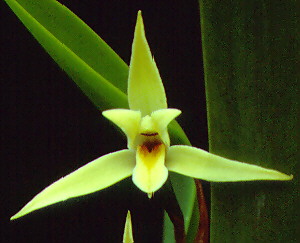 Plants of Nid. boothii consist of ovoid to spindle-shaped, slightly compressed pseudobulbs that are 2.5-6 cm long, which are borne along a creeping rhizome at 1-3 cm intervals. The pseudobulbs become wrinkled with age and they bear one or two rigid, linear leaves that are 6-25 cm long and 8-15 mm wide at the apex. In autumn inflorescences develop on the new stems before the pseudobulbs are fully matured.

Each raceme, which is up to 12 cm long bears 2-6 loosely arranged, strongly fragrant flowers. The sepals and petals are creamy-white to greenish-white and the lip is cream with yellow at the base.

Being a rambling plant Nid. boothii can soon outgrow its pot. Any well-drained potting medium can be used in conjunction with a pot, tray or pan as well as basket and slab culture. Shading of 50-70% and plenty of water can be given during the warmer months. Plants seem to benefit from a cooler drier rest during winter after the growths have finished. A winter minimum of 10-12oC is recommended for best results.