The following article was written for the Orchid Species Bulletin published by the Orchid Species Society, which is based in Brisbane, Queensland in August 2005.
Bear in mind that any cultivation notes refer to the subtropical conditions of Southern Queensland, Australia. 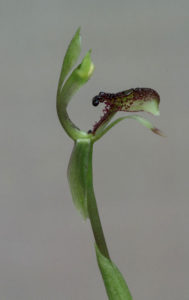 Myrmechila truncata (D.L.Jones & M.A.Clem.) D.L.Jones & M.A.Clem. is an Australian native orchid. It is perhaps better known as Chiloglottis truncata. David Jones and Mark Clements first described this species as Chiloglottis truncata in the Proceedings of the Royal Society of Queensland in 1987. The specific epithet comes from the Latin truncatus (truncate) for the lip apex that appears to be cut off.

Based upon morphological and molecular studies, David Jones and Mark Clements have just transferred this species to the new genus Myrmechila D.L.Jones & M.A.Clem. in the Orchadian in 2005. The generic name comes from the Greek myrmex (ant) and cheilos (lip) for the arrangement of the lip calli.

Mmc. truncata is a terrestrial tuberous plant that produces a pair of narrow-elliptical leaves on stalks that are about 5 mm long. Dark green above and paler beneath, the leaves are up to 6 cm long and 16 mm broad, with slightly wavy margins. Each fertile plant produces an upright stem that is up to 10 cm long with a single greenish flower that is about 12 mm across. The flowers have sepals tipped with 1 mm long yellow clubs at the apex. Its lip has a shiny black callus on the centre that consists of groupings of glands.

Endemic to south-east Queensland, Mmc. truncata grows in open forest on grey gravelly soils. It has been confused with Mmc. formicifera Fitzg., but can be distinguished by smaller flowers that have a truncate apex to the lip. 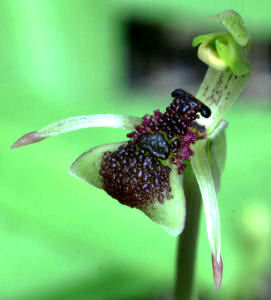 The Australasian Native Orchid Society, Victorian Group’s (1988) basic terrestrial mix consists of 2 parts coarse sand, 1 part rich loam, 1 part buzzer chips (wood chips/shavings), 1 part leaf mould. To each 9 litre bucket of the basic mix is added 1 dessertspoonful of blood and bone and 1 dessertspoonful of garden lime or dolomite. During active growth from autumn to spring, Mmc. truncata can be watered regularly to keep the mix evenly moist. An occasional, but not frequent application of dilute fertiliser solution can be given. Alternatively a small amount of organic fertiliser such as blood and bone can be added to the potting medium. After the plants die down and become dormant for the summer period the potting mix should be allowed to dry so that the tubers do not rot. At this stage I usually shift my pots away from the overhead sprinklers for the summer.

Annual repotting is recommended in late summer (December & January) to ensure that the plants do not become too crowded and to also renew the potting medium. Many growers like to combine some of the old media with new mix. If you are re-using some of the old media ensure that the same tubers are replanted into the same mix, in order to prevent spread of virus. The repotting stage is also a good time to sort the tubers into various sizes and separate out the larger, flowering size plants from the smaller, non-flowering plants.