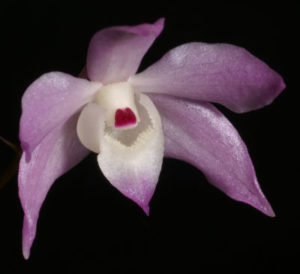 Dendrobium hercoglossum Rchb.f. was described by Heinrich Gustav Reichenbach in the Gardeners’ Chronicle in 1886. The specific epithet comes from the Greek hercos (fence) and glossa (tongue) for the lip, which has a transverse barrier that divides it in two.

Den. hercoglossum is a medium-sized plant with clustered, slender stems that are 20-35 (-57) cm long and 7 mm in diameter. The spindle-shaped stems are slender at the base and a little swollen toward the apex. They generally become pendulous as they lengthen. Howard Wood (2006) says that the stem sometimes grows for 2 years, producing 2 swellings, with the leaves falling and blooming on the recently grown portion. Each pseudobulb bears 4-6 narrowly linear, two-ranked leaves that are 5-10 cm long and 4-11 mm wide. The pseudobulbs produce several inflorescences from nodes along the upper portion. Inflorescences often emerge before the leaves drop so flowering can occur on the matured leafy or leafless stems. Each raceme bears 2-5 (-8) waxy flowers that last for about 2 weeks. 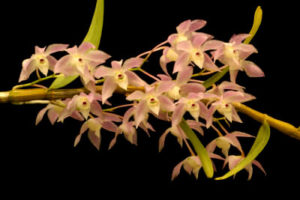 The showy flowers of Den. hercoglossum are 2.5 (-4) cm across and have rosy pink to bright magenta sepals and petals. The sepals and petals may be white at the base grading to light mauve toward the tips. Its lip is white, tinged with green or cream with mauve or magenta at the apex. The surface of the pouch-like lip is finely pubescent. The contrasting anther cap is dark purple to magenta. Sweetly fragrant, the flowers produce a scent like violets.

Often found on trees near streams, Den. hercoglossum grows between 600-1,260 m altitude. It is distributed from Malaya, south-eastern Thailand, Laos, Vietnam, Cambodia and south-western China. According to Howard Wood, reports of this species from Hong Kong refer to the related Den. aduncum Wall. ex Lindl.

Den. hercoglossum is best grown under about 60-70% shade with high humidity during the warmer months. It can be potted in a small hanging pot or grown in a basket using a well-drained medium. It can also grow well if mounted on a cork slab or tree fern, particularly if humidity is high and daily watering can be given in summer. Regular applications of liquid fertiliser can also be given during active growth, with none or less at other times. During winter a cooler, drier rest can be given in keeping with its natural habitat. Potted plants may only need water once or twice a week during this period when it is not actively growing.