The following article was written for the Orchid Species Bulletin published by the Orchid Species Society, which is based in Brisbane, Queensland in November 2001.
Bear in mind that any cultivation notes refer to the subtropical conditions of Southern Queensland, Australia 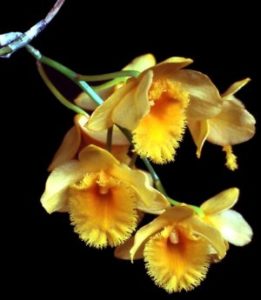 Dendrobium fimbriatum Hook. was collected in Nepal in 1820 by Nathaniel Wallich who sent plants to the Liverpool Botanic Garden where it first flowered in 1822. William Hooker described it in his Exotic Flora in 1823. The specific epithet comes from the Latin fimbriatus (fimbriate) for the plumose-fimbriate margin to the lip, which is a distinctive characteristic of this species. Howard Wood (1999) places this species in section Holochrysa Lindl., which is related to section Callista Lindl. Species of both of these sections have usually yellow flowers that last for 5-10 days. Den. fimbriatum is distributed through Nepal, Sikkim, Myanmar, Thailand, Laos, Vietnam, southern China, and Malaya, where it is mostly found between 500-1,500m altitude but can be located up as high as 2,400 m elevation. 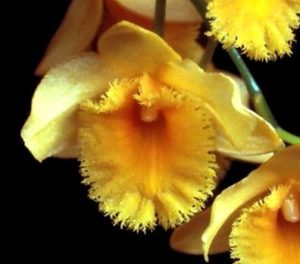 Den. fimbriatum has erect, arching or pendulous cane-like stems that are 60-120 cm or more (180-200 cm) long. They become light yellow-green and furrowed with age and bear many two ranked leaves along the upper half. Its oblong acute, dark green leaves that are 8-15 cm long and 2-3 cm broad are deciduous after 2-3 seasons. Pendulous inflorescences up to 18 cm long are borne from the upper nodes of the matured, leafless stems. Each stem can produce racemes for several seasons. Bearing 6-15 showy flowers that open together on each raceme, the resulting display on a large plant is certainly spectacular.

Its flowers are 4-7.5 cm across and have pale yellow-green to deep orange-yellow sepals and petals and a darker orange-yellow lip. They have a sparkling, crystalline texture. The lip colour varies, with most forms having a dark maroon patch on the centre of the lip. This more common form with the dark eye was described 15 year later by Joseph Hooker as Den. fimbriatum var. oculatum Hook.f., which I recognise as forma oculatum.  The typical f. fimbriatum usually has smaller flowers than f. oculatum. Short-lived, the sourly scented blooms last for about 7-10 days.

A large-growing plant, Den. fimbriatum appears to be ideally suited to cultivation in the Brisbane region. It can also be grown in the garden in frost-free areas by tying it onto a tree. Any well-drained medium suits it well, using pot or basket culture. Provide it with bright light such as 50-70% shade with plenty of water and high humidity during the growing months. Liquid fertiliser applied during the growing period will be beneficial. In winter a drier rest period while it is not actively growing will help to initiate flowers in spring.