The following article was written for the Orchid Species Bulletin published by the Orchid Species Society, which is based in Brisbane, Queensland in September 2011.
Bear in mind that any cultivation notes refer to the subtropical conditions of Southern Queensland, Australia. 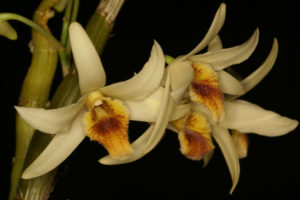 Dendrobium heterocarpum Wall. ex Lindl. is a widespread and variable species that is currently understood to be distributed from Sri Lanka, India, Myanmar, Laos, Thailand, Vietnam, southern China, south to Peninsular Malaysia, Java, Sulawesi and east to the Philippines. Its long-lived flowers are sweetly fragrant, however some of the plants from the Philippines are not perfumed. Howard Wood (2006) recognises Den. rhombeum Lindl., the Philippine variant, as distinct. Jim Cootes (2001) says that there are two forms found in the Philippines. One form grows erect to about 50 cm long and the flowers have a hairy lip with a lot of brown markings. The other is semi-pendulous with stems up to 2 m long, which have flowers that have a differently shaped, smooth lip. There seem to be two distinct species involved in the Philippines. Jim Comber (1990) says that plants in the Philippines are quite distinct from those found in Thailand whilst those from Borneo have much smaller flowers than either Javanese or Thai plants. 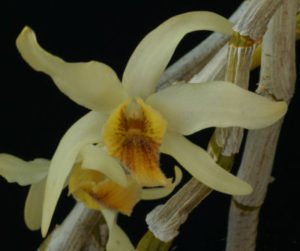 Nathaniel Wallich collected Den. heterocarpum in Nepal and named it in his Catalogue but John Lindley formally described it in Genera and Species of Orchidaceous Plants in 1830. Wallich had given its specific epithet from the Latin hetero (different) and carpus (fruit) but the significance seems to me to be obscure. It is also known by its later synonym Den. aureum Lindl. as it was shown at the August 2009 meeting.

Den. heterocarpum has spindle-shaped or subcylindrical erect or pendulous pseudobulbs that are 40-150 cm long and about 1 cm diameter. The pseudobulbs are many-noded and are amber-yellow when older. Deciduous oblong-lanceolate or tongue-shaped leaves are borne along the pseudobulbs in two ranks. The leaves are 10-18 cm long and 1.5-2.5 cm broad. Short inflorescences are borne from nodes along the apical half of the leafless matured two or three year old stems. Inflorescence carry 2-3 (-6) flowers that are 5-8 cm across.

Variable in colour, the flowers of Den. heterocarpum have white, pale creamy-yellow to amber segments with a yellow disc on the lip. There are also maroon, crimson or brown venations on the side-lobes and base of the mid-lobe of the hairy or velvety lip. The margins of the lip mid-lobe are often recurved with the apex also reflexed. Long-lived the flowers have a strong perfume that Lindley (1844) described as “something intermediate between violets and primroses”. Others have described the scent as foetid or unpleasant.

John Lindley described f. pallidum in the Botanical Register in 1839. It had a white lip except for a yellow stain at the base. Other forms that have been described in the literature include f. album, which had pure white flowers and f. aurantiacum that had rich orange-yellow blooms.

Good air circulation, 70% shade and a well-drained potting medium are some of the cultural requirements of Den. heterocarpum. Use a small pot, water and fertilise regularly when it is in active growth. Long-stemmed plants that tend to grow pendently are best allowed to hang. Cease fertilising and reduce watering as the growths mature in late autumn and provide with a cooler drier rest. Flowering occurs on the older leafless growths and the newly produced growths usually shed their leaves in the next season. I recommend a winter minimum of 12oC but plants will tolerate lower temperatures for short periods if they are dry at night.