The following article was written for the Orchid Species Bulletin published by the Orchid Species Society, which is based in Brisbane, Queensland in December 2010.
Bear in mind that any cultivation notes refer to the subtropical conditions of Southern Queensland, Australia. 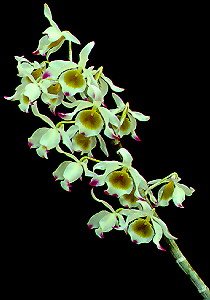 Dendrobium crystallinum Rchb.f. was discovered by Colonel Robson Benson in Burma (Myanmar) in 1867 and he sent plants to Messrs. Veitch, where it flowered at their Chelsea Nursery in 1868. Heinrich Gustav Reichenbach described it in the Gardeners’ Chronicle that same year. He gave it the specific epithet from the Latin crystallinus (crystalline) for the anther cap, which is covered with glassy papillae, giving it a crystalline appearance.

Den. crystallinum can form large clumps and has tufted slender pseudobulbs that are 30-60 cm long and 8 mm in diameter. The pseudobulbs may be upright or are usually pendulous due to their weight. Its new stems bear soft linear-lanceolate leaves that are 10-15 cm long in two ranks along their upper third. Following maturation of the pseudobulb, the leaves are deciduous at the beginning of the dry winter season. 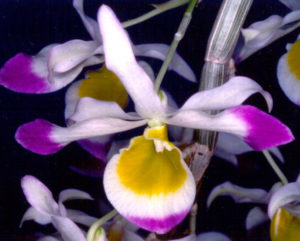 Short inflorescences emerge from nodes along the upper portion of the stems. The raceme of Den. crystallinum carries 1-3 beautiful white flowers that are 4-5 cm across. The petals and lip have a pale to dark purple or magenta blotch on the tips and the sepals may also have a similarly colour tip. Its lip is white or yellow with a white border and the base is orange. Den. crystallinum f. ochroleucum Guillaumin is the form that lacks the purple-magenta blotches. The flowers are very fragrant. 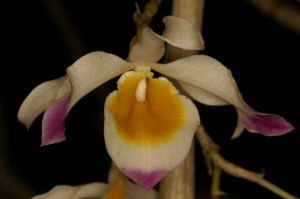 Den. crystallinum is a widespread species that is distributed from northeast India, Myanmar, Thailand, Cambodia, Laos and Vietnam. It often grows on small trees in exposed situations between 900-1,700 m altitude.

Due to its generally hanging or semi-pendulous habit, Den. crystallinum is perhaps best grown in a hanging pot or basket. Alternatively it can be mounted on tree fern or cork bark, however daily watering and high humidity will be necessary in summer. In winter when it is deciduous, provide it with a cooler, drier rest with occasional misting to prevent the pseudobulbs shrivelling excessively. Plants are able to withstand very cold temperatures down to 0oC if kept dry, however I recommend a winter minimum of 10oC.