The following article was written for the Orchid Species Bulletin published by the Orchid Species Society, which is based in Brisbane, Queensland in April 2011.
Bear in mind that any cultivation notes refer to the subtropical conditions of Southern Queensland, Australia. 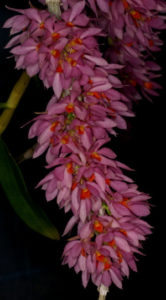 Dendrobium bracteosum Rchb.f. was described by Heinrich Gustav Reichenbach in the Gardeners’ Chronicle in 1886. The specific epithet comes from the Latin bractea (bract) and the suffix –osus (abundance or marked development) for the prominent long bracts subtending the flowers.

A tufted plant, Den. bracteosum has erect or pendulous terete to spindle-shaped, slender green to yellow-green stems that are 5-35 (-40) cm long. The stems are covered with leaf sheaths and 3-10 two ranked leaves when young, and become leafless and grooved with age. The ligulate to oblong, rich green leathery leaves are 4-8 (-13) cm long and 1-2 cm broad. Usually several short inflorescences that are up to 4 cm long are produced from the nodes of the leafless stems matured in the previous seasons.

Densely flowered, the racemes of Den. bracteosum carry 3-8 (-15) showy flowers that are subtended by ovate acuminate bracts, which are nearly as long as the blooms. Usually not opening widely, the waxy flowers are variable in size and are about 2.5-3 cm across. Variable in colour, the flowers may be white, pink or rose-purple with an orange to orange-red lip and a green column. Den. bracteosum f. album has white flowers with an orange lip. Long-lived, the flowers last for 3-4 months or up to 7 months under ideal conditions. 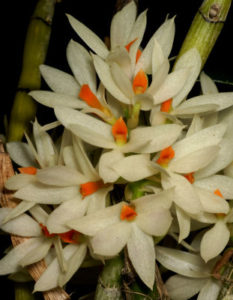 Distributed in Papua (Irian Jaya), New Guinea and New Ireland, Den. bracteosum is found as an epiphyte between near sea level to about 600 m altitude. Plants are found growing in bright light in mangroves and coastal forests in the steamy lowlands. Helmut Bechtel et al. (1992) report that it has been found as high as the montane forest zone. 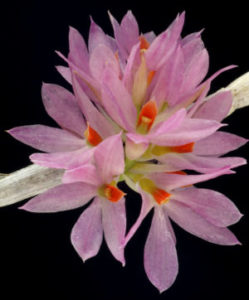 A warm-growing species, Den. bracteosum requires bright light such as 50-70% shade and a well-drained potting medium. Good air circulation is also important, together with high humidity and plenty of water during the warmer summer months. In winter, give the plant a drier rest with reduced watering and a recommended minimum of 18oC. Plants perform best under hot conditions but will tolerate temperatures down to 12oC for short periods if they are dry at night. This species will often shed its leaves and be vulnerable to rot with lower temperatures.