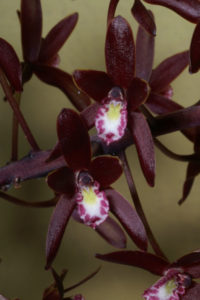 Cymbidium canaliculatum f. sparkesii (Rendle) F.M.Bailey was first published by Alfred Rendle as Cym. sparkesii in the Journal of Botany in 1898. Rendle distinguished this taxon by the flowers being of dark crimson colour with longer segments. Frederick Bailey reduced it to varietal status as Cym. canaliculatum var. sparkesii in the Comprehensive Catalogue of Queensland Plants in 1913. Bailey could not see any difference except for the dark colouring, as the dimensions of the segments fall within the range of the typical coloured forms. Alick Dockrill (1966) preferred to recognise the continual variation of Cym. canaliculatum by reducing var. sparkesii to synonymy. David Jones (1988, 2006) and David Du Puy and Phillip Cribb (1988) also follow Dockrill’s treatment.

Robert Brown first described Cym. canaliculatum in 1810 in Prodromus Florae Novae Hollandiae. He gave it the specific epithet from the Latin canaliculatus (canaliculate i.e. with a longitudinal groove or channel) in reference to the distinctive, thick canal-shaped leaves.

Cym. canaliculatum has clustered ovoid, grey-green pseudobulbs that are 3-12 cm long and 1.5-4 cm across. The pseudobulbs are covered at the base with a few large sheaths and bears 2-6 leaves. The heavily textured, rigid, pale green to grey-green leaves are deeply channelled and curved. The leaves are 10-50 cm long and 1.5-3 cm broad. Each pseudobulb bears 1-3 erect to pendulous racemes from the base. The racemes are 15-40 cm long and carry 5-60 or more scented flowers. Despite Du Puy and Cribb saying that Cym. canaliculatum is not scented, the perfume is strongest in the middle of the day. 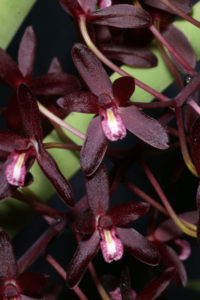 Cym. canaliculatum appears to be a tough-looking plant and can withstand rather dry conditions. It is common and widely distributed from the Kimberleys in the north of Western Australia, across the northern part of the Northern Territory, and from Cape York Peninsula along the east coast of Queensland to central New South Wales. Cym. canaliculatum inhabits dry sclerophyll forests and woodlands between near sea level to 900 m altitude. It can be found growing on trees by the sea in the northern areas, and in the southern part of its range it is usually encountered inland away from the coast. It often grows in the hollow trunks and branches of trees with its extensive root system deep within.

David Jones (1988) says that Cym. canaliculatum grows best in regions with a hot climate such as inland where it is warmer. Readers are referred to an excellent article on the culture of Cym. canaliculatum by Desmond Neuendorff in the April 1996 issue of Orchids Australia. Des has been awarded a number of Certificates of Cultural Commendation for his well-grown specimens of this species. Plants require plenty of good air movement and bright light. Regular watering is required during summer, especially when in active growth, however plants must be allowed to dry out prior to being re-watered. During winter plants can be allowed to become much drier with occasionally misting in the mornings to prevent shrivelling of the pseudobulbs. Excellent drainage is required so a coarse or open potting medium is needed. Des Neuendorff prefers to use a mix of 50% medium bark and charcoal mixed with polystyrene foam. Terracotta pots have been found to be preferable by some growers including Des, however good results have also been obtained in plastic pots