The following article was written for the Orchid Species Bulletin published by the Orchid Species Society, which is based in Brisbane, Queensland in August 2005 and updated in April 2021.
Bear in mind that any cultivation notes refer to the subtropical conditions of Southern Queensland, Australia. 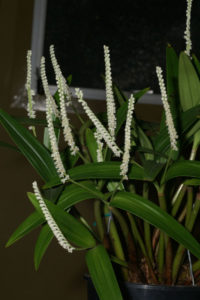 Cryptochilus strictus (Lindl.) Kuntze was first described by John Lindley as Eria stricta in Collectanea Botanica in 1826. The specific epithet comes from the Latin strictus (upright, straight) for the inflorescences. Carl Kuntze transferred this taxon to Pinalia in Revisio Generum Plantarum in 1891.

Recent DNA studies show that Eria is polyphyletic, since it comprises species that are derived from different ancestors. Based on these studies, Yan Peng Ng and Henrik Pedersen transferred this species to Cryptochilus in Botanical Journal of the Linnean Society in 2018.

Ccs.. strictus produces clusters of fleshy upright cylindrical pseudobulbs that are (2-) 6-14.5 cm long and 3-5 mm in diameter. The base of the pseudobulb is covered with membranous sheaths that are 2-3 cm long, which soon dry and become fibrous. Each pseudobulb bears two shortly stalked leaves at the apex. Oblong-elliptic to lanceolate, the leathery leaves are 7.5-12 (-19) cm long and 1-2 cm broad. Several (1-3) upright racemes that are 8-13 (-18) cm long are borne from the apices of the pseudobulbs. 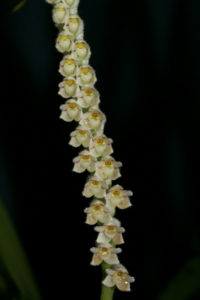 The racemes bear many small flowers that are 2-4 mm long along the upper half of the inflorescence, which are densely arranged facing one side. The flowers of Ccs.. strictus do not open widely so the blooms are bowl-shaped and they are white, sometimes with a tinge of pink along the basal edge of the petals. Its bilobed yellow and brown pollen cap gives the flower a cheery face-like appearance. The outside of the flowers is thickly covered with white wool, which extends also along the green inflorescence. Unlike many other species of the genus, the flowers of Ccs.. strictus seem to be comparatively long-lived and last for 2-3 weeks.

Ccs.. strictus is distributed in subtropical valleys in the Himalayas (Nepal, Sikkim, NE. India), Myanmar, and southern China between 300-1,300 (-1,800) m elevation. An intermediate-growing species, Ccs.. strictus seems to be ideally suited to southeast Queensland conditions. Grow it under about 70% shade in a well-drained medium. During the warmer months provide high humidity, plenty of water and good air circulation. Give it a slightly drier winter rest after flowering, when the plant is not actively growing. Plants will still need less frequent watering as it should not be allowed to remain dry for long periods.