The following article was written for the Orchid Species Bulletin published by the Orchid Species Society, which is based in Brisbane, Queensland in February 2011.
Bear in mind that any cultivation notes refer to the subtropical conditions of Southern Queensland, Australia. 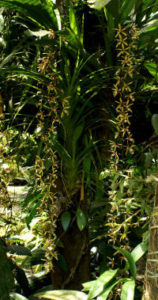 Coelogyne pulverula Teijsm. & Binn. is perhaps better known as Coel. dayana Rchb.f. Johannes Teijsmann and Simon Binnendijk described Coel. pulverula in Natuurkundig Tijdschrift voor Nederlandsch-Indië in 1862. The specific epithet comes from the Latin pulvereus (powdery, dust-like) and the diminutive suffix –ula and refers to the powdery appearance of the flower. Heinrich Gustav Reichenbach published Coel. dayana in the Gardeners’ Chronicle in 1884, so this specific name is a later synonym.

A large epiphytic plant, Coel. pulverula has clustered pseudobulbs that are borne along a creeping rhizome, so that they may be up to 1.5 cm apart. The shallowly grooved spindle-shaped to narrowly conical pseudobulbs are 7-25 cm long and 2 cm in diameter near the base. The apex of each pseudobulb bears two oblanceolate to elliptic leaves that are 25-65 cm long and 4.5-11 cm broad with a 6-15 cm long stalk. Inflorescences are produced from the centre of the newly developing growth before the leaves are halfway developed. 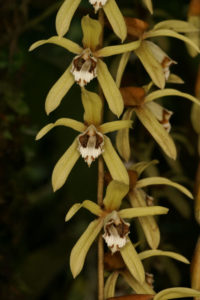 The peduncle is enclosed in bracts and the pendulous straight to zigzag rachis is 25-110 cm long. Opening simultaneously the raceme bears 10-55 flowers that are about 5 cm across at 2.5 cm intervals. The flowers of Coel. pulverula have pale to light yellowish brown to greenish ochre sepals and petals. Its tubular white lip has the front of the side-lobes banded brown and the inside of the side-lobes brown to dark brown with white nerves and a white margin. The white midlobe often has a narrow brown cross band over the longitudinal keels. 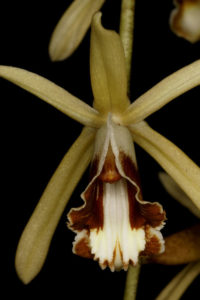 Distributed in southern Thailand, Peninsular Malaysia, Borneo and Sumatra, Coel. pulverula is found between 275-1,900 m. It grows on the trunks and large branches of trees in lowland rain forest and lower montane forests. Sometimes it can be found on rocks often near streams and rivers. Gunnar Seidenfaden and Jeffrey Wood (1992) say that Coel. pulverula “may be easily cultivated in the lowlands, but is not very free-flowering in Singapore. This species seems to require intermediate conditions with a cooler drier winter rest, which seems to help promote flowering.

Grow it under about 60-70% shade with high humidity and good air circulation. Use a well-drained medium and water it regularly during the warmer months. Reduce the watering frequency while it is not actively growing but do not allow it to remain dry at the roots for long periods. I recommend a winter minimum of 12oC.