The following article was written for the Orchid Species Bulletin published by the Orchid Species Society, which is based in Brisbane, Queensland in August 2012.
Bear in mind that any cultivation notes refer to the subtropical conditions of Southern Queensland, Australia.

Coelogyne viscosa Rchb.f. was first described by the younger Reichenbach in Allgemeine Gartenzeitung in 1856. The specific epithet comes from the Latin visco (glue) and the suffix –osa (full development) for some glutinous or sticky nature, however the significance is unclear. This species was subsequently named again by Reichenbach in conjunction with Charles Parish as Coel. graminifolia C.S.P.Parish & Rchb.f. in the Transactions of the Linnaean Society of London in 1874.

Coel. viscosa is a sympodial epiphytic or sometimes lithophytic plant that has narrowly ovoid pseudobulbs. The pseudobulbs are 4-7 cm tall and 1-1.5 (-3.5) cm broad and become ribbed with age. Enclosed with bracts at the base, the pseudobulbs are borne close together on a short rhizome at 1-1.5 cm intervals. Each pseudobulb bears two narrow leathery, grass-like leaves that are 25-53 cm long and 8-15 mm wide, with a 1-5 cm long grooved stalk. A short upright to arched inflorescence that is 6-15 cm long is borne from the centre of the newly developing growth. 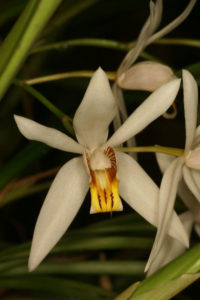 The raceme of Coel. viscosa carries 2-7 flowers that open simultaneously. Between 4-6 cm across, the fragrant or musty-scented flowers have white sepals and petals. Its lip is white except for the orange-yellow base to the mid-lobe and tips of the side-lobes. The side-lobes are veined with dark brown and the crisp-edged mid-lobe bears 3 crisped dark brown keels.

A warm- to intermediate-growing species, Coel. viscosa seems to grow and flower well in the southeast Queensland region. Plants grow well under about 70% shade in a well-drained medium with good air circulation. Maintain high humidity and water it regularly during the warmer months. Give it a slightly drier winter rest but it should not be allowed to remain dry for long periods. Leaf tip die-back may occur if humidity is too low.