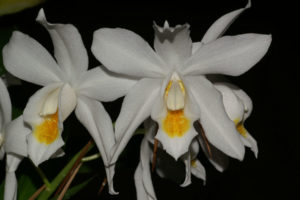 Coelogyne mooreana Sander ex Rolfe was sent by Wilhelm Micholitz from the Lang Bian range in Annam, Vietnam to Messrs. Sander & Sons of St. Albans, England, where it flowered in European cultivation in 1906. Frederick Sander named it after F.W. Moore, Director of the Glasnevin Botanic Gardens, Dublin. Robert Rolfe formally described it in the Kew Bulletin in 1907. ‘Brockhurst’ is one of the well-known choice cultivars of this species.

Coel. mooreana has clustered pseudobulbs that are borne along a sheathed rhizome at up to 1 cm intervals. The ovoid-oblong, weakly ridged pseudobulbs become furrowed with age. Vaguely or bluntly angled, the yellowish green pseudobulbs are 5-7.5 cm long. At the apex of each pseudobulb are two linear-oblanceolate, narrow acute petiolate green leaves. The very glossy and heavily textured leaves are 25-40 cm long and 2.5-3.5 cm broad. Erect racemes that are 20-50 cm long emerge from the centre of the newly developing growth. The racemes carry 4-8 showy fragrant flowers, with 5-6 being more usual. Acute bracts subtending the flowers drop soon after the buds open. 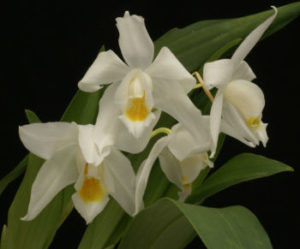 The flowers of Coel. mooreana are 6-10 cm across and open more or less simultaneously. They are pure white with the disc of the lip golden-yellow or ochre to orange. Its lip has a dense patch of fringed lamellae in the centre. The fringing has been described as “3 long fimbriate lamellae”; however illustrations show the fringing to be more like a dense random patch.

Endemic to Vietnam, Coel. mooreana is found at around 1,300 m altitude and appears to be rare in cultivation. An intermediate-growing species, Coel. mooreana requires a well-drained medium and bright light such as about 70% shading for the southeast Queensland region. Maintain high humidity with good air circulation and water it regularly during the warmer months. Plants can be given a slight winter rest with reduced watering frequency, but should not be allowed to remain dry for long.