The following article was written for the Orchid Species Bulletin published by the Orchid Species Society, which is based in Brisbane, Queensland in November 2011.
Bear in mind that any cultivation notes refer to the subtropical conditions of Southern Queensland, Australia. 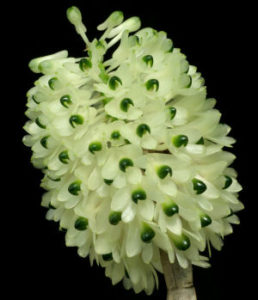 Recent morphological and molecular studies show that the generic limits of Dendrobium need to be reviewed. Based upon these studies, Mark Clements resurrected the genus Coelandria Fitzg. in Telopea in 2003. The generic name comes from the Greek coelos (hollow) and anthera (anther) for the brownish pollinia of the type species, which reminded Fitzgerald of hollow scales.

Members of Coelandria are characterised by cylindrical to spindle-shaped stems with seasonally deciduous leaves. They produce densely multi-flowered bottle-brush like inflorescences usually on the matured leafless stems. Shiny and smooth, the white, pink, purple, orange or green flowers have a lip that is often contrasting in colour. The boat-shaped lip embraces the column and is constricted near the base and has a transverse callus. Its column-foot has a central longitudinal groove and a nectary at the base. The tubular flowers and nectar suggests that this genus is pollinated by honeyeaters. 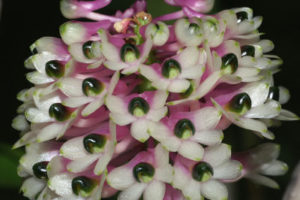 Cld. smillieae is a medium to large epiphytic or lithophytic plant which can form very large clumps that are often circular. The crowded spindle-shaped pseudobulbs are 15-150 cm long (usually 50-80 cm) and 1-2 (-3) cm in diameter. When young, the pseudobulbs are clothed with thin white papery bracts and are leafy throughout the upper half for the first season. After the first year or so, the stems become bare and eventually longitudinally ribbed with age.

Green to yellow, the stems are often suffused red-brown with black-brown nodal rings. The numerous two-ranked alternating, thin-textured leaves are often twisted at the base so that they lie on one plane. Oblong to lanceolate, the bright green leaves are 5-20 cm long and 2-4 cm broad.

Cld. smillieae sometimes produces several racemes from nodes towards the upper portion of the matured leafless stem. Older stems usually bear racemes for several seasons. Densely crowded and bottlebrush-like, the upright raceme is 4-15 cm long and carries numerous waxy flowers. The flowers do not open widely and are 11-18 mm across and 15-25 mm long. Variable in colour, the non-resupinate flowers are white, greenish, cream to cream-yellow or pink to reddish-pink. The flowers have a fleshy lip that tightly embraces the column. Upturned and pouch-like, the lip has a prominently dark green shiny apex. The tips of the sepals and petals are often green. 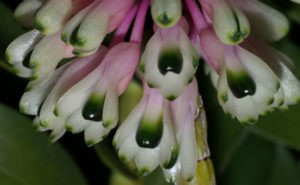 Over half of the raceme may be open at one time as the buds open quickly in succession. The flowers are pollinated by a honeyeater known as the Bush Canary or Yellow Honeyeater (Lichenostomus flavus), which hovers in front of the tubular blooms while feeding on the nectar.

Distributed in northeastern Queensland from the Torres Strait Islands to Townsville, Cld. smillieae is also found in New Guinea. Plants are found in the tropical lowlands extending to moderate altitudes in the ranges up to 600 m elevation. Cld. smillieae grows in open forests and along rainforest margins as well as in monsoonal thickets. The upper branches and trunks of trees are the main hosts but plants may be found in the hollows of limbs and on rocks and boulders in mostly full sun.

A warm-growing species, Cld. smillieae has a reputation for being difficult to maintain in cultivation without hot humid conditions and bright light. Grow it under about 70% shade in a small container with a well-drained medium. Large plants may become top-heavy so a hanging pot or basket is an ideal container. Maintain high humidity with good air circulation. Water it regularly during the warmer months while it is actively growing. Give it a slightly drier winter rest with occasional misting or water in the morning on sunny days during the cooler months so that the leaves are dry by nightfall. I recommend a winter minimum of 12-15oC, with overhead protection for winters in the southeast Queensland region.