The following article was written for the Orchid Species Bulletin published by the Orchid Species Society, which is based in Brisbane, Queensland in June 2003.
Bear in mind that any cultivation notes refer to the subtropical conditions of Southern Queensland, Australia. 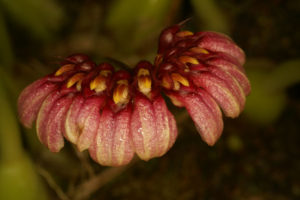 Cirrhopetalum curtisii Hook.f. was described by Joseph Hooker in the Botanical Magazine in 1897 based upon a plant from Peninsular Thailand. He named it in honour of Charles Curtis, collector for Messrs. Veitch & Sons. Charles Curtis was Superintendent of the Penang Botanic Garden from 1884-1903 and would have collected this species for the Veitch nursery. Johannes Smith described this species 20 years later as Bulbophyllum corolliferum based upon a plant from Borneo in Bulletin du Jardin Botanique de Buitenzorg in 1917. Leslie Garay recognised the plants with yellow flowers from Thailand as var. lutescens in the Harvard Papers in Botany in 1999. The varietal epithet comes from the Latin luteus (deep yellow) and the suffix –escens (becoming) for the pale yellow blooms. 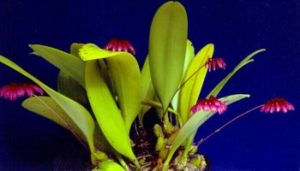 Leslie Garay, Fritz Hamer and Emly Siegerist redefined Cirrhopetalum in the Nordic Journal of Botany in 1994. One of the main characters distinguishing Cirrhopetalum from other genera of the Bulbophyllum alliance is the lateral sepals that are twisted once to form a convex blade which is joined in the centre along the outer margin. I await future DNA studies, which will show more clearly the relationships of the taxa of this alliance. 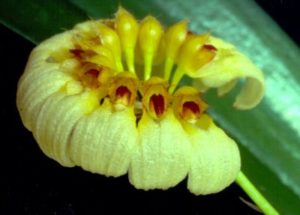 Cirr. curtisii has strongly 4-5-angled ovoid pseudobulbs that are 1-1.5 cm high and 9.5-13 mm diameter, which are borne along a creeping branching rhizome at 6-18 mm intervals. The single apical, stalked leaf is 9-16 cm long and 23-31 mm broad. Slender inflorescences are produced from the base of the pseudobulb, which are 7-14 cm long. They are mostly reddish or purplish and bear 9-10 (-12 or more) small flowers in an umbel at the end. The blooms are 11-13.5 mm long and are variable in colour but are generally dark purple with yellow tips to the lateral sepals and a yellowish lip. They may vary from white or yellowish with purple stripes on the lateral sepals and with purple tips to the dorsal sepal and petals. Cirr. curtisii var. lutescens has pale yellow flowers that are more intense around the petals and dorsal sepal and have an orange lip. Short-lived the blooms last for 4-5 days and produce a clear egg-white-like fluid that coats the surfaces of the flower.

Distributed in Peninsular Thailand, Peninsular Malaysia, Sumatra and Borneo, Cirr. curtisii is found at low altitudes. It is a warm-growing species that requires high humidity and a winter minimum of 18oC. Grow it in a small pot, shallow tray or basket with a well-drained medium. To accommodate its creeping habit it can be mounted on cork bark, tree fern or hardwood but may need daily watering or misting during the summer and the warmer months. Good air circulation is also important. In winter ensure that the leaves are dry at night by watering in the morning of sunny days. Brown and black spots develop on the leaves when temperatures drop below 15oC. Leaf drop usually occurs at temperatures below 12oC.