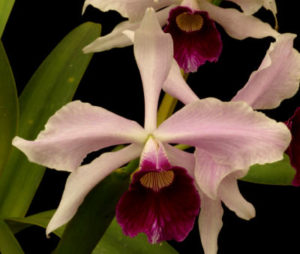 Brasilaelia purpurata (Lindl. & Paxton) Campacci was discovered by François Devos in Santa Catharina, Brazil in 1847. This species was sent to Vershaffelt at Ghent, Belgium. Plants were distributed from the Vershaffelt nursery in Europe, where it flowered first for James Backhouse & Sons of York, England. John Lindley and Joseph Paxton described this species first as Laelia purpurata Lindl. & Paxton, in Paxton’s Flower Garden in 1852. The specific epithet comes from the Latin purpuratus (dressed in purple), referring to the colour of the mid-lobe of the lip, in the type specimen. 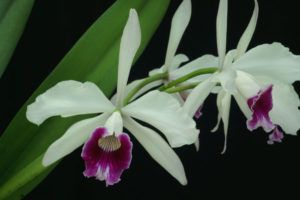 Guy Chiron and Vitorino Castro Neto (2002), Marcos Campacci and Sergio Gutfreund (2006), and Guido Braem (2006), have interpreted the work on DNA analysis differently. Chiron and Castro transferred L. purpurata to the genus Hadrolaelia, in Richardiana in 2002.

Cassio van den Berg has ventured further with the DNA studies, and he has accepted the transfer of this species to Cattleya [C. purpurata (Lindl. & Paxton) Beer] in Neodiversity in 2008. 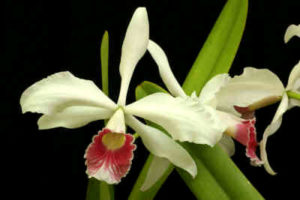 Bll. purpurata is an epiphytic plant, which produces club-shaped, to spindle-shaped pseudobulbs that are somewhat laterally compressed, or flattened. The pseudobulbs are smooth when young, and become ribbed with age, and are 15-50 cm long, and 2-3 cm broad. Each pseudobulb has a single, leathery, oblong-ligulate upright leaf, which is 22-40 cm long, and 4-5 cm broad, at its apex. An upright raceme that is 20-32 cm long, is produced from a compressed, apical sheath that is about 15 cm long. The raceme carries 2-5 (-8) showy flowers, which open simultaneously, and are 15-20 (-25) cm across. Variable in colour, the flowers of Bll. purpurata usually have white to delicate pink sepals and petals. Its tubular, trumpet-shaped lip is similarly coloured on the outside and has a yellow throat that is veined purple to crimson. The side-lobes and base of the mid-lobe are rich deep crimson-purple. Lasting for 2-3 weeks, the flowers produce a pleasant scent.

In the past, numerous colour forms and cultivars have been described. Some of the more distinctive forms include:

Bll. purpurata f. atropurpurea B.S.Williams has intense rose sepals and petals with a lip that is purple inside and out and has a yellow throat with purple veining.

Bll. purpurata f. carnea Hort. possesses pure white sepals and petals and a white lip that is marked with a yellowish throat and flesh-pink mid-lobe.

Bll. purpurata f. flammea varies from white to rose, often with the sepals longitudinally striped with darker rose. Its petals are marked in the centre, sometimes from the base, towards the tip with red-purple and the lip is dark purple.

Bll. purpurata f. russelliana B.S.Williams has pale sepals and petals that are suffused with lilac and has a band of pale rose near the light yellow throat that is veined with rose.

Bll. purpurata f. striata L.Linden has pinkish sepals and petals that may rarely be white and petals that have longitudinal red stripes. The surface of the lip is purple-red and a yellow throat that is veined purple-red.

Bll. purpurata f. virginalis L.C.Menezes has pure white flowers with the throat of the lip that may or may not be marked with yellow of varying intensity.

Bll. purpurata f. werkhauseri Hort. produces white flowers with a lip that has a yellow throat and is veined with deep slate-blue. In addition, the mid-lobe is tinged with the same dark slate-blue.

Endemic to Brazil, Bll. purpurata has been found in the states of Rio de Janeiro, São Paulo, Santa Catarina and Rio Grande do Sul. This species was declared the state Floral Emblem for Santa Catarina in 1983. Easy to grow and flower in the south-east Queensland region, Bll. purpurata requires a well-drained medium with bright light such as 50-70% shade. Ensure good air circulation with high humidity and water it regularly during the warmer months. Give it a slightly drier winter rest, with occasional water or misting in the morning on sunny days to prevent the pseudobulbs from shrivelling.