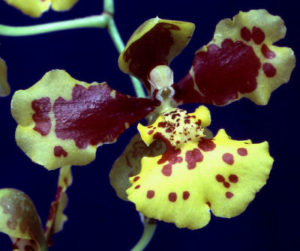 Baptistonia sarcodes (Lindl.) Chiron & V.P.Castro is a highly variable species, not only in plant habit but also in the size, form and colouring of its flowers. John Lindley first described this species as Oncidium sarcodes Lindl. in the Journal of the Horticultural Society in 1849. Its specific epithet comes from the Greek sarc (flesh-) and odes (-like), supposedly for the peculiar red-brown colour of its blooms. My guess is that the flowers of the specimen that Lindley described were more chestnut or flesh-coloured, rather than the dark red-brown. 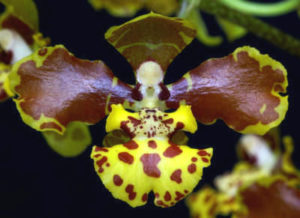 Bapt. sarcodes has clustered spindle-shaped or cigar-shaped, dark green pseudobulbs that are slightly compressed and are 10-15 cm long and 1.5-3 cm broad. At the apex of each pseudobulb are 2 or rarely 3 glossy green, leathery oblong to lanceolate leaves that are 15-30 cm long and 2.5-6 cm broad. Arched to pendulous basal inflorescences are produced that are 30-180 cm long, bearing many flowers on the panicle. The slender peduncle is dull purple particularly towards the base, spotted with green and the short branches along the apical half, each carry a few flowers. Its long-lived flowers are 3.7-5 cm across and are not scented. Most variable in colour, the flowers have yellow sepals and petals that vary from having a prominent chestnut brown to red-brown blotch with a yellow margin, through to being spotted with chestnut- or red-brown. The bright yellow lip has a few reddish-brown spots around the callus, which is whitish or yellow and spotted red-brown. 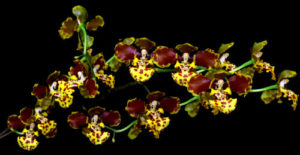 Bapt. sarcodes is easy to grow and flower in the southeast Queensland region. Use a small pot or basket with a well-drained medium and provide it with 70% shade and good air circulation at all times. Alternatively it can be mounted on tree fern, hardwood or cork bark; however plants grown in this manner may need daily watering during the warmer months. Keep it evenly moist with regular watering from spring to autumn. Liquid fertiliser is beneficial while it is actively growing. In winter reduce watering and provide it with a drier rest, however do not allow it to remain dry for too long. Occasional watering will prevent the pseudobulbs from shrivelling excessively. I recommend a winter minimum of 12oC.