The following article was written for the Orchid Species Bulletin published by the Orchid Species Society, which is based in Brisbane, Queensland in March 2010.
Bear in mind that any cultivation notes refer to the subtropical conditions of Southern Queensland, Australia. 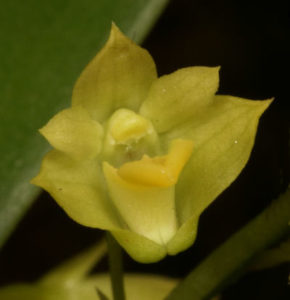 Australorchis monophylla (F.Muell.) Brieger is one of my favourite scented orchids. Its strong sweet perfume has been described as being like lily-of-the-valley. Ferdinand von Mueller first described this species as Dendrobium monophyllum F.Muell. in Fragmenta Phytographiae Australiae in 1859. Von Mueller gave it the specific epithet from the Greek mono (one) and phyllum (leaf), for the unifoliate pseudobulbs.

Friedrich Brieger transferred Den. monophyllum to Australorchis in Orchideen in 1981. Based upon morphological and molecular studies, Mark Clements and David Jones (2002) have accepted this transfer. Members of Australorchis can be distinguished by the short several-noded pseudobulbs, with 1-2 long-lived, apical leaves. In addition, multi-flowered racemes are produced from the upper nodes, and the flowers have a 3-lobed lip.

A creeping, mat-forming plant, Au. monophylla often forms small, to large, spreading clumps upon rocks, or trees. Its ovoid-conical, furrowed pseudobulbs are (2-) 6-10 (-12) cm long, and 1.5-3 cm wide, and are yellowish, or somewhat orange to red-brown. The pseudobulbs are borne along a creeping, often branching rhizome, at about 2 cm intervals. When young, the new pseudobulbs are covered with thin, brown, sheathing bracts. With age, the pseudobulbs become longitudinally furrowed, or ribbed. 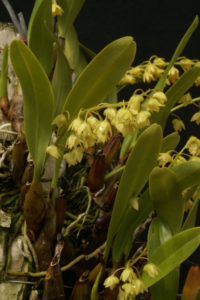 At the narrowed apex of each pseudobulb is a single (rarely two) oblong, bright green, thin-textured leaf, which is (5-) 8-12 cm long, and 1.5-3 cm broad. Erect to arched racemes are produced from the apex of the pseudobulb, and are 7-17 (-20) cm long, carrying 5-20 flowers. The bright yellow, cupped, or bell-shaped, waxy flowers of Au. monophylla often droop, and are 6-8 mm across. Long-lived, and lasting for over 4 weeks, the flowers produce a strong, pleasant perfume.

Au. monophylla is one of our lovely Australian native orchids, which is distributed in the eastern tropics from the Fitzroy River, in north Queensland, to down as far as the Clarence River, in New South Wales. It inhabits the branches of rainforest, or sclerophyll forest trees, and also grows on rocks, or cliffs, where it receives plenty of sunlight. In the northern range of its habitat, it is rarely found below 600 m altitude, whereas in the subtropical areas, it is widespread from the coast, to the mountains, around 1,000 m elevation.

David Jones (1988) says that Au. monophylla can be difficult to grow, unless it is given bright light, humidity, and plenty of air movement. It prefers slabs of weathered hardwood, or cork bark, and can grow very well on suitable garden trees. In temperate areas, it should be kept fairly dry over winter. Au. monophylla seems to like to dry out quickly between watering. During the summer, mounted plants should be watered frequently, and I recommend a winter minimum of 10oC.