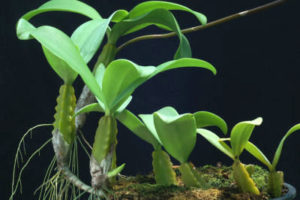 Megaclinium maximum (Lindl.) Rchb.f. was first described by John Lindley as in 1830 in his Genera and Species of Orchidaceous Plants. Heinrich Gustav Reichenbach transferred it to Bulbophyllum in 1861 in Walpers, Annales Botanices Systematicae. Being such a large genus, there seems to be a move to resurrect the genus Megaclinium, for those species with a prominent, usually flattened rachis. Recent authors such as Jaap Vermeulen (1987) and Victor Summerhayes have preferred to maintain Megaclinium as a section of Bulbophyllum. This species has been available from some nurseries as Bulbophyllum sp. (Zimbabwe #39). 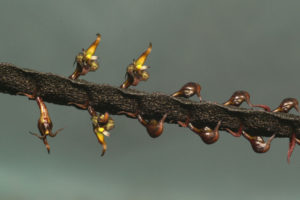 The pseudobulbs of Mgm. maximum are borne at 2-10 cm intervals along a woody rhizome that is 3-11 mm in diameter. Pale green to yellowish green, the ovoid pseudobulbs are 3-5 angled, slightly flattened and are 3.5-10 cm long and 1-3 cm across. Occasionally the edges have large knobs as seen in plants from the southern savannah. Each pseudobulb has two, sometimes three, apical linear-lanceolate leaves that are thick, leathery and pale green. The leaves are 4-20cm long and 1.5-5.5 cm across with rounded to obtuse apices. 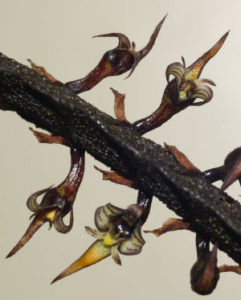 Inflorescences that are 15-20 cm long are produced from the base of the matured pseudobulbs. The peduncle has 5-14 tubular scales along the length. Often blade-like, the rachis of Mgm. maximum is flattened and is 6-56 cm long and 8-50 mm broad. The edges of the rachis are sharp and straight to undulate. Sometimes the rachis may be slightly twisted. Pale yellow to greenish yellow, the rachis is often spotted with purple. It may be entirely purple or purplish-brown with fine, pale yellow spots. From 16-120 flowers are borne along the rachis in two ranks, along the mid-line at 2.5-9 mm intervals. Sometimes the flowers are open simultaneously but usually they open successively so that only a few are open at a time on each side of the rachis. Often the flowers are secund (face one direction), facing upwards.

Mgm. maximum is found over a wide area of distribution and in many different habitats. It has been found in lowland primary and secondary forest, montane forest, savannah woodland from sea level to 1,500 m elevation. Growing with lichens in the central part of the crown of trees as an epiphyte, Mgm. maximum can also be found growing as a lithophyte on humus covered rocks. Its distribution extends from Guinea, Libya, Ivory Coast, Ghana, Nigeria, Cameroon, Central African Republic, Sao Tomé & Principe, Gabon, Congo, Zaire, Uganda, Kenya, Tanzania, Angola, Zambia, Malawi, Zimbabwe and Mozambique.