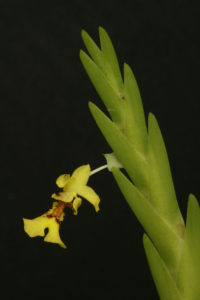 A tufted plant, Lhta. oerstedii has clustered erect to arched leafy stems that are (10-) 25-45 cm long and 8-15 mm wide. The stems are covered by flattened two-ranked, overlapping semi-triangular leaves that are 1-3 (-4) cm long and 4-8 mm broad. Pendulous terminal or lateral inflorescences that are up to 3.5 cm long are produced from nodes amongst the uppermost leaves. The inflorescences carry one to several successively borne flowers that are subtended by glaucous heart-shaped to semi-orbicular bracts. 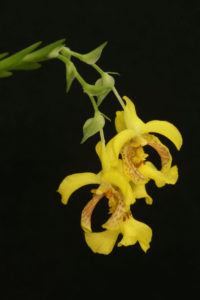 The small flowers of Lhta. oerstedii are 11-12 mm across and 15-22 mm long. They have strongly reflexed sepals, incurved petals and a prominent lip. The floral segments are bright yellow and are spotted and barred dark red to reddish-brown on the column and base of the lip. At the base of the complex 5-lobed lip there is a fleshy slightly hairy, quadrate callus that consists of four papillose-corrugated central ridges. Long-lived, the flowers last for about 4 weeks or more.

Lhta. oerstedii is a common species in dense tropical highland forests from Mexico, Guatemala, Honduras, Nicaragua, Costa Rica to Panama. It grows in the midcanopy and is found from 1,100-1,900 (-2,650) m altitude. 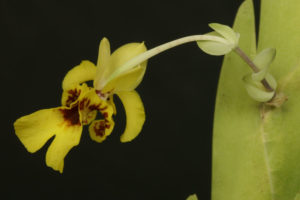 An intermediate to cool-growing species, Lhta. oerstedii requires high humidity and good air circulation at all times. Heat stress due to lack of air movement with high summer temperatures will show up in the leaves as black spotting and eventual leaf drop. Grow it under 70-80% shade in a small pot with a well-drained medium. Keep it evenly moist at the roots at all times. Watering frequency can be reduced in winter, but plants should not be allowed it to remain dry for long periods.