The following article was written for the Orchid Species Bulletin published by the Orchid Species Society, which is based in Brisbane, Queensland in December 1997.
Bear in mind that any cultivation notes refer to the subtropical conditions of Southern Queensland, Australia. 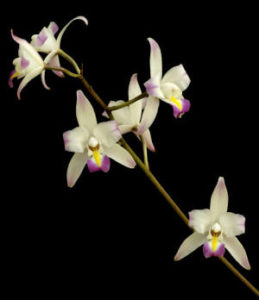 Laelia albida Bateman ex Lindl. was first described by John Lindley in the Botanical Register in 1839. The derivation of the specific epithet is from the Latin albidus (whitish) for the flowers. James Bateman had suggested the name since the basic colour of the flower was white. At the time of its publication it was a novelty in the genus because all the other species known had flowers that were rose or lilac in colour.

L. albida is almost always known as an epiphyte. It is recognised by the clustered, conical-ovoid elongated pseudobulbs that are wrinkled when old and are 3-4 (-7) cm long and 17-23 mm in diameter. The two or sometimes three, linear-lanceolate, leathery dark green leaves at the apex of the pseudobulb are 7-22 cm long and 9-18 mm wide. The apical erect to arched inflorescence is 10-60 (-90) cm long and carries 4-12 flowers at the end. 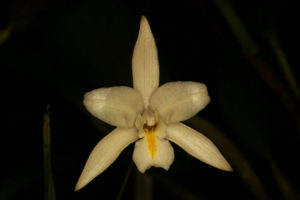 Each showy flower of L. albida is 2.4-5 cm across with a strong fragrance of honey. The sepals and petals are white or whitish cream sometimes with the tips tinged with pink. Rarely are the flowers entirely pink. The lip is white, pale rose to deep rose and the centre of the lip has 3 parallel yellow keels. The base of the lip may be lined with radiating spots of red-purple.

L. albida is widely distributed in Mexico on the Pacific slope, where it is relatively common and is probably the commonest Laelia species. It is found over an extensive area in the states of Sinaloa, Durango, Nayarit, Jalisco, Michoacan, Guerrero, Oaxaca and Puebla. It grows mainly upon evergreen oak trees but sometimes on yuccas or rarely on rocks, at elevations from 1,300-2,600 m altitude in mixed open, dry deciduous forests of pine, oak and juniper. 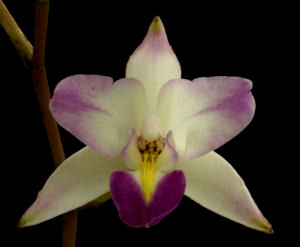 Plants of L. albida from the northwestern part of the habitat produce very short inflorescences that scarcely exceed the length of the leaves and the flowers are small. The plants from Oaxaca have a big variation in the colour of the flowers with the lip varying from white, rose or dark rose. There are known localities where the entire flower is completely rose (f. rosea) with the lip a darker rose colour. In some flowers the colour of the segments fades towards the edges giving a splash-petal look to the flower. In the past there has been a salmonea colour form described, with salmon-pink sepals and petals.

An intermediate to cool-growing species, L. albida is best grown in a small pot or basket with a well-drained medium. A good alternative would be to mount it on cork bark, tree fern or a totem. Grow it under bright light such as 50-70% shade with good air circulation. Maintain high humidity and water it regularly during the warmer months. Give it a drier rest in winter with reduced watering frequency and occasional misting in the morning of sunny days to prevent the pseudobulbs from shrivelling excessively.