The following article was written for the Orchid Species Bulletin published by the Orchid Species Society, which is based in Brisbane, Queensland in April 2006.
Bear in mind that any cultivation notes refer to the subtropical conditions of Southern Queensland, Australia. 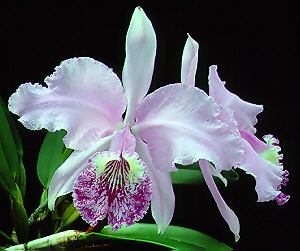 Cattleya lueddemanniana Rchb.f. was first sent to Mr. Pescatore at St. Cloud, Paris as C. maxima. Upon flowering it proved to be a different species and was named by the younger Reichenbach as C. lueddemanniana in Xenia Orchidacea in 1854. Heinrich Reichenbach named the species after Pescatore’s gardener.

C. lueddemanniana is a unifoliate plant with pseudobulbs that are 7-27 cm long and 8-25 mm broad. Borne along a rhizome at 1-3 cm intervals, the pseudobulb bears an apical leaf that is 8.5-20 cm long and 3-6 cm wide. When compared to other unifoliate species, C. lueddemanniana has more cylindrical and smoother pseudobulbs and generally a narrower, longer leaf. Inflorescences that are 3-13 cm long are produced from a sheath that is 3-10 cm long in spring. The racemes usually bear 2-3 (rarely 4) large showy flowers that are 15-20 cm across. The development from new growth through to flowering is continuous and the flowers last for about 2-3 weeks. 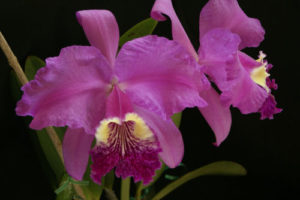 The strongly perfumed flowers of C. lueddemanniana vary from pale to medium, rarely dark, rose-purple. The lip is rose-purple, paler towards the base, with dull cream-yellow centrally at the base. There are two pale yellow to sometimes white eye-like patches on either side half way along the length. Purple lines from the base, along the mid-line eventually radiate and grade to irregular dark purple nerve lines and irregular spots and splashes on the apical third which can sometimes be solidly coloured. Rarer colour forms include f. alba Hort. ex Godefroy which has pure white flowers with yellow in the throat; f. coerulea Hort. with blush violet-blue blooms that have a darker violet-blue lip with yellow eyes; and semi-alba forms with white flowers that have a dark purple lip. One famous semi-alba cultivar is ‘Stanleyi’ FCC/RHS which has white flowers that have a purple lip with deep yellow eyes.

Endemic to Venezuela, C. lueddemanniana is found in the lower, warm to hot regions of the north-facing slopes of the Coastal Range, generally west of Caracas between sea level and 700 m altitude. It can be found growing on the upper trunks of trees but also on thorn bushes and columnar cacti in drier forests. During the day the habitat experiences temperatures greater than 30oC with nights dropping sometimes below 18oC. Carl Withner (1990) says that it is best grown in a warmer part of the greenhouse and needs plenty of light and fresh air, reflecting its sea level habitats.