The following article was written for the Orchid Species Bulletin published by the Orchid Species Society, which is based in Brisbane, Queensland in March 2011.
Bear in mind that any cultivation notes refer to the subtropical conditions of Southern Queensland, Australia. 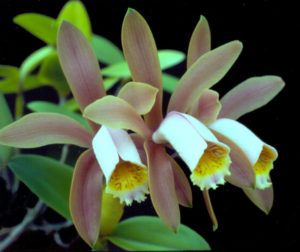 Cattleya forbesii Lindl. is a distinctive member of the genus that cannot be confused with any other. H.O. Forbes collected it in Brazil for the Horticultural Society of London and introduced it to European cultivation. John Lindley described it in Collectanea Botanica in 1823, naming it Forbes’ honour.

C. forbesii is an epiphytic plant that has slightly swollen, thin elongate pseudobulbs that are 10-20 cm tall and 10-15 mm in diameter. The pseudobulbs are borne along a short creeping rhizome and bear two apical leaves. Elliptic or narrowly ovate, the leathery leaves are 9-14 cm long and 2.5-5 cm broad. Inflorescences that are 9-12.5 (-14) cm long are produced from a sheath that is 4-6 cm long at the apex of the stems. The raceme bears 2-5 flowers that are 6-10 cm across.

Variable in colour, the flowers of C. forbesii have pale green or yellow-green sepals and petals that may be tinged purple-brown or muddy-tan. Its lip is white on the outside, with pale pink inside on the side-lobes and a deep yellow streak in the centre. The side-lobes are veined on the inside with purple to tan or carmine and the mid-lobe has a white margin. The hidden column is yellow, stained and spotted with red.

John Lindley described Forbes’s yellow Cattleya in the Botanical Register in 1826 as having yellow-green sepals and petals that were brownish-yellow on the outside (of the sepals). The pale yellow lip had a yellow interior that was striped and spotted with red. 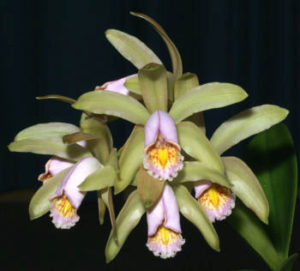 C. forbesii f. punctata J.Day ex Braem is best referred to as the rare spotted form of the species, which has yellowish sepals and petals that are profusely spotted with reddish-brown. C. forbesii f. aurea A.Seidel ex Roeth was published by Jürgen Röth in Die Orchidee (Hamburg) in 2006. It is the yellow form of the species, which has golden yellow sepals and petals and a white lip that is marked inside on the disc with orange. In addition, f. aurea lacks the red or purple-brown veining on the disc of the lip, which is found in the typical form. C. forbesii var. viridiflora Horta was described by Paula Horta in Rodriguésia in 1936. Var. viridiflora is a green form that has a yellow lip, which lacks the purple veins on the disc that is found in the typical form.

I have seen several colour forms of C. forbesii in cultivation that may be labelled as “yellow”, “green” or “pink”, which vary in the amount of yellow, green or pink colour in the sepals and petals. The white lip is usually veined internally with red to purple-brown. Other than the above-mentioned forms, these other variants do not appear to have been validly published.

Found in Rio de Janeiro, São Paulo and Minas Gerais states, Brazil, C. forbesii grows on rocks and trees near sea level. A common inhabitant of coastal tidal swamps and streamside forest, C. forbesii grows on large trees that are 2-10 m high, on the trunk or outstretched horizontal branches. The environment where this species grows is shady and is shared with wet moss, lichen, philodendrons and bromeliads. Conditions are hot and humid with regular sea breezes.

An easy species to grow and flower in the southeast Queensland region, C. forbesii requires 70-80% shade and a well drained medium. Maintain high humidity during the warmer months with good air circulation and ensure that the roots do not dry out for long periods. In winter provide it with a drier rest, with reduced watering or misting in the mornings of warm sunny days. Despite its lowland habitat, C. forbesii survives winters down to 12oC without ill effects particularly if the leaves are dry at night.