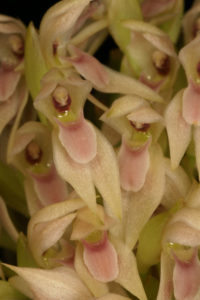 Camaridium densum (Lindl.) M.A.Blanco was first described by John Lindley as Maxillaria densa Lindl. in the Botanical Register in 1836. The specific epithet comes from the Latin densus (crowded, dense) for the clustered fascicle of flowers.

Recent DNA data analysis confirms that Maxillaria is grossly polyphyletic (contains more than one common ancestor). Based on these studies Mario Blanco transferred Max. densa to the resurrected genus Camaridium Lindl. in Lankesteriana in 2007.

Variable in growth habit, Camaridium generally have pseudobulbs separated by rhizome of variable length. Some species are tufted plants; others may lack pseudobulbs and have monopodial growths, while a few may have dimorphic growth. The latter have young shoots with tightly spaced pseudobulbs and monopodial mature growths without pseudobulbs. Usually the floral bract is longer than the pedicel and ovary, often overlapping the base of the dorsal sepal. The sepals and petals have a crystalline appearance and lack fibre bundles. Most species have deceptive flowers, although some do produce nectar. 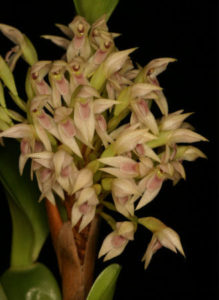 Cmd. densum is an epiphytic plant that has pseudobulbs which are clustered or spaced along thick elongated branching ascending or hanging rhizomes. Roots seem to be produced mostly from the base of the plant. The rhizome and lower portion of the pseudobulb are covered with sheaths that become dark brown and dry. Its elliptic-oblong or ovate-oblong compressed two-edged pseudobulbs are 1.5-3.5 (-8) cm long and 1-2.5 (-3.5) cm across. Each yellow-green pseudobulb bears a single linear to linear-oblong apical leaf that is 6-20 (-32) cm long and 1-3 (-4) cm broad. A very dense fascicle of 30-60 short single-flowered inflorescences are produced from the base of the sheaths of the new growth before the pseudobulb appears. The scented flowers of Cmd. densum are 6-8 mm across and 13-20 mm long and last for about 5-7 days. Variable in colour, the flowers may be greenish-white, yellowish-white with a purple tinge to pale pink or rarely deep maroon or reddish-brown.

Widely distributed in Mexico, Belize, El Salvador, Guatemala, Honduras and Nicaragua, Cmd. densum is rather common in damp woods at low altitude. It grows on trees in a wide variety of habitats from mangrove swamps, tropical rain forest, and wet cloud forests or sometimes as a terrestrial in pine forests. Plants are found from sea level up to 1,200 (-1,400) m altitude. Cmd. densum is a warm to intermediate-growing plant that requires about 70% shade and a well-drained medium. Plants can become top-heavy so may need some support or they can be grown in a hanging pot or basket. Maintain high humidity and water it regularly as it should not be allowed to remain dry for long periods. I recommend a winter minimum of 12oC.