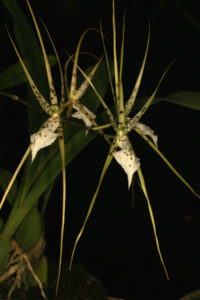 Brassia brachiata Lindl. has been often confused with the related Brs. verrucosa Lindl. and is often treated as a synonym for the latter. Brs. brachiata is distinguished from Brs. verrucosa by the larger loosely arranged flowers that are of similar size along the raceme. The flowers are differently (pleasantly) scented and have a distinctly lobed lip that bears fewer warts. Brs. verrucosa is a more northerly species that produces densely flowered, strongly two-ranked racemes carrying 10-20 flowers which decrease in size from the base to the apex of the rachis. Unpleasantly scented of black pepper, the flowers of Brs. verrucosa are smaller and have an essentially unlobed oblong-obovate lip with numerous green warts. 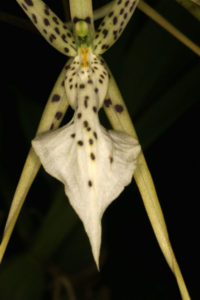 John Lindley described Brs. brachiata in Plantae Hartwegianae in 1842 based upon a plant collected by Hartweg in Guatemala. The specific epithet comes from the Latin brachiatus (armed) probably for the long arm-like petals. Brs. brachiata is an epiphytic plant that forms clumps with pseudobulbs borne along a short rhizome. Narrowly oblong to ovoid-conic, the slightly compressed smooth light green pseudobulbs are 7.5-10 cm long and 3-4 cm wide. The base of the pseudobulb is sheathed by 1-2 leafy bracts and the apex bears two leaves. The thinly leathery, shortly stalked elliptic-lanceolate leaves are 16-30 cm long and 2.5-4.5 cm broad.

An arched to spreading lateral inflorescence is produced from the inner basal leaf sheath at the base of the recently matured pseudobulb. The raceme of Brs. brachiata is 50-60 cm long and bears 6-10 large showy spidery flowers that are 16-25 cm long. Two-ranked, the 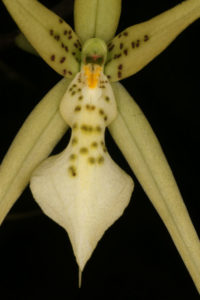 alternating flowers are loosely arranged along the rachis. Yellowish-white to yellow-green, the sepals and petals have bars and spots of reddish brown to dark brown on the basal third. Its yellowish-white lip bears flat dark olive-green to green-brown warts.

Brs. brachiata is distributed from Chiapas in southern Mexico and from Guatemala to Panama. It grows on the trunks and larger branches of trees in evergreen to semi-deciduous cloud forests between (600-) 1,300 -1,800 m altitude. Easy to grow and flower in the south-east Queensland region, Brs. brachiata requires bright light such as 50-70 % shade and a well-drained medium. Heavy shade may be a reason for this species being reluctant to flower. Water it frequently and maintain high humidity during the warmer months. Give it a cooler drier rest in winter with occasional water or misting in the morning of sunny days to prevent the pseudobulbs from shrivelling.