The following article was written for the Orchid Species Bulletin published by the Orchid Species Society, which is based in Brisbane, Queensland in May 2009.
Bear in mind that any cultivation notes refer to the subtropical conditions of Southern Queensland, Australia. 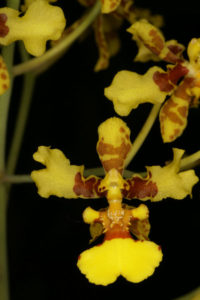 Vitekorchis excavata (Lindl.) Ramowicz & Szlach. was first described by John Lindley as Oncidium excavatum Lindl. in Sertum Orchidacearum in 1838, based on a specimen collected by A. Mathews in northern Peru. Lindley gave it the specific epithet from the Latin excavatus (excavated) due to the depression at the base of the underside of the lip. Agnieszka Ramowicz and Dariusz Szlachetko transferred this species to Vitekorchis in the Polish Botanical Journal in 2006.

DNA analyses show that several closely related species that have been published in Vitekorchis make up an isolated group without close relatives. The fifth volume of Genera Orchidacearum, published in 2006 accepts this genus.

Vto. excavata is a robust plant with numerous clustered pseudobulbs that are borne along a short, sometimes upwardly creeping, rhizome. Nearly globose to ovoid or oblong-ovoid, the slightly compressed pseudobulbs are 7-9 (-18) cm long and 3.5-4 cm across. Somewhat 4-angled in cross-section, the pseudobulbs are covered at the base with 2-4 sheathing leaves. The linear to narrowly oblong, light yellowish green apical leaf (rarely 2) is 20-50 cm long and (1.5-) 2.5-4 cm broad. An erect to arching paniculate, pyramidal inflorescence is borne from the base of the recently matured pseudobulb and is 45-100 (-150) cm long. The panicle has a long peduncle and 8-12 branches in the upper one-quarter to one-third. Each branch may bear 10-20 flowers that individually last for about 10 days. The flowering period however, occurs over an extended period as buds on the panicle open progressively. 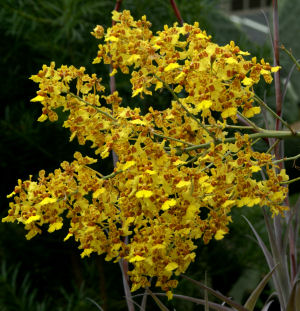 Distributed in Ecuador, Bolivia and Peru, Vto. excavata is a terrestrial plant that is found growing on rocks, grass and brush covered lateritic red clay soils. It grows on steep slopes in moist montane forests between (1,900-) 2,400-2,800 m altitude. An intermediate to cool-growing species for subtropical regions, Vto. excavata requires cool summer temperatures with high humidity and good air circulation. Grow it under 70% shade in a well-drained potting medium and keep it moist at all times. Watering frequency can be reduced during the cooler months and while it is not actively growing. The roots should not be allowed to remain dry for long periods, so regular watering or misting will be needed during the winter.