The following article was written for the Orchid Species Bulletin published by the Orchid Species Society, which is based in Brisbane, Queensland in January 1996.
Bear in mind that any cultivation notes refer to the subtropical conditions of Southern Queensland, Australia. 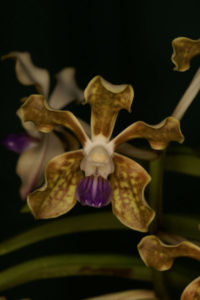 Vanda tessellata (Roxb.) G.Don can sometimes be seen labelled under its synonym of V. roxburghii R.Br. V. tessellata is known as the type species for the genus. Robert Brown first established the genus Vanda in the Botanical Register in 1820 based upon V. roxburghii, which is now known to be a later synonym. William Roxburgh had earlier described the same species as Epidendrum tessellatum in Plants of the Coast of Coromandel in 1795. George Don subsequently transferred it to Vanda in Loudon’s Hortus Britannicus in 1830.

V. tessellata has stems that are 30-60 cm tall on plants that have narrowly linear, channelled and recurved leathery leaves, which are 15-20 cm long and 1-2 cm across. Suberect inflorescences that are 15-25 cm tall bear 6-12 sweetly scented blooms, which are 4-5 cm across. The sepals and petals have undulating margins and are pale green, yellowish green or somewhat bluish with tessellations or chequered lines of olive-brown on the inner surface. The outer surface is white, while the lip is violet-purple with a white margin, and often deeper purple towards the apex. Colour variants have been reported that have a darker coloured bluish lip, as well as a pink-lip colour form. The long-lasting flowers are produced in summer and last for 5-6 weeks.

V. tessellata is distributed from northeast India, Nepal, Myanmar, southern India and Sri Lanka. It seems to be an ideal subject for cultivation in the Brisbane area, being able to tolerate the local climatic conditions without too much difficulty. The thick white roots like to have plenty of air around them so basket culture is ideal, provided high humidity can be maintained during the warmer months of the year. Plenty of water and fertiliser can be given during these months, with reduced amounts during winter. Low night temperatures down to 10 oC or less seem not to be harmful if the plant is dry at night.