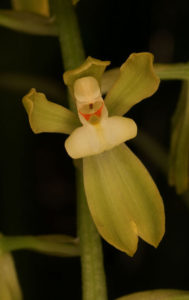 Gomesa recurva R.Br. was described by Robert Brown in the Botanical Magazine in 1815. The specific epithet comes from the Latin recurvus (recurved) for the backward-curved lip.

Gom. recurva is an epiphytic plant with clustered narrowly ovoid to oblong pseudobulbs that are 4-7.5 cm long and 2-3.5 cm in diameter. Somewhat compressed and two edged, the mid-green pseudobulbs are sheathed at the base with several bracts that soon dry. The apex of each pseudobulb bears 2-3 thinly leathery, oblong to linear-oblanceolate leaves that are 15-30 cm long and 2-3 cm broad. One or two arched inflorescences are produced from the basal sheath of the recently matured pseudobulb.

The densely many-flowered raceme of Gom. recurva is 20-35 cm long. Its flowers are about 2 cm long and have oblong-spathulate sepals and petals. 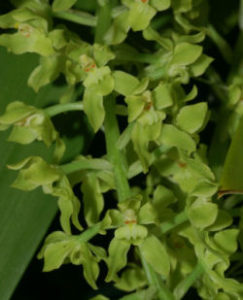 The flowers are yellowish-green with a yellow basal streak on the lip. A red margin to the stigma on the column underside provides a contrast with the rest of the flower.

Endemic to Brazil, Gom. recurva is found in the cool moist mountains of Minas Gerais, Espírito Santo, Rio de Janeiro, São Paulo, Paraná and Santa Catarina. Jim and Barbara McQueen (1992) say that “Gom. recurva is an easily grown species which flowers regularly in cultivation. It may be mounted or potted, and needs a moderately shady position. Intermediate to cool conditions suits it, with fairly high humidity and year-round moisture, with a slight reduction in winter.”