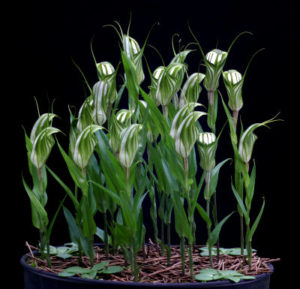 Diplodium robustum (R.S.Rogers) D.L.Jones & M.A.Clem. is one of our Australian native orchids that is perhaps better known as Pterostylis robusta R.S.Rogers. Richard Rogers first described this greenhood as Ptst. robusta in the Transactions and Proceedings of the Royal Society of South Australia in 1927. The specific epithet comes from the Latin robustus (robust) for the chunky flower.

Based upon recent morphological and molecular studies, David Jones and Mark Clements resurrected the genus Diplodium Sw. They transferred Ptst. robusta to Diplodium in The Orchadian in 2002. Stephen Hopper and Andrew Brown (2003, 2004), however believe that such a transfer is unnecessary to maintain monophyly within Pterostylis. 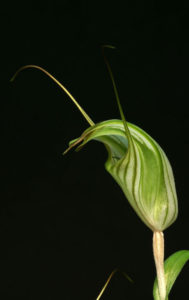 The single hooded flower of Dpl. robustum at the apex of the flowering stem is 3-6 cm across and 3-5 cm long. It is translucent white with bold green to olive veins, stripes and suffusions. Sometimes the suffusions may be brownish or pinkish, particularly towards the tip of the galea. Its lanceolate tapered lip is white at the base and deep green to dark red-brown in the apical third with the tip not protruding nor visible in the set position. Clonal colonies are formed by daughter tubers produced on the end of stolonoid roots.

Widely distributed from southern New South Wales, Victoria and South Australia west to Eyre Peninsula, Dpl. robustum has been found between sea level to 600 m altitude. It grows in drier forests and woodlands and extends well inland. Plants are often found under shrubs in sheltered moist situations in sandy soils where it forms small colonies in the protection of low shrubs. 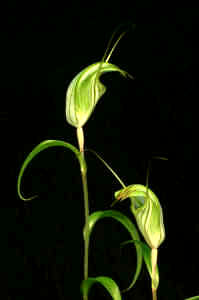 David Jones (1988) recommends a potting mix based upon sandy loam mixed with about one third leaf mould or eucalyptus shavings. The Australasian Native Orchid Society, Victorian Group’s (1988) basic mix consists of 2 parts coarse sand, 1 part rich loam, 1 part buzzer chips (wood chips/shavings), 1 part leaf mould. To each 9 litre bucket of the basic mix is added 1 dessertspoonful of blood and bone and 1 dessertspoonful of garden lime or dolomite. During active growth from autumn to spring Dpl. robustum can be watered regularly to keep the mix evenly moist. An occasional, but not frequent application of dilute fertiliser solution can be given. Alternatively a small amount of organic fertiliser such as blood and bone can be added to the potting medium. After the plants die down and become dormant for the summer period the potting mix should be allowed to dry so that the tubers do not rot. At this stage I usually shift my pots away from the sprinkling area for the summer.

Annual repotting is recommended in late summer (December & January) to ensure that the plants do not become too crowded and to also renew the potting medium. Many growers like to combine some of the old media with new mix. If you are re-using some of the old media ensure that the same tubers are replanted into the same mix, in order to prevent spread of virus. The repotting stage is also a good time to sort the tubers into various sizes and separate out the larger, flowering size plants from the smaller, rosette producing plants.