The following article was written for the Orchid Species Bulletin published by the Orchid Species Society, which is based in Brisbane, Queensland in August 2009.
Bear in mind that any cultivation notes refer to the subtropical conditions of Southern Queensland, Australia. 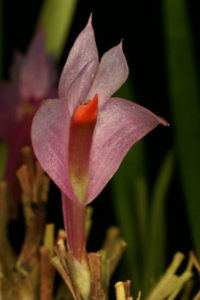 Dendrobium violaceum Kraenzl. was described by Fritz Kraenzlin in Das Pflanzenreich in 1910. The specific epithet was derived from the Latin violaceus (violet) for the colour of the flowers.

This species is included in Dendrobium section Oxyglossum Schltr. The flowers of this section have prominent ribs or wings on the ovary.

Den. violaceum is an epiphytic or sometimes lithophytic plant that eventually forms a large clump. It produces clustered fleshy cylindrical pseudobulbs that are 3-5 cm long, which are swollen at the base and narrower at the apex. The apex of each stem bears 2-4 upright to spreading linear leaves that are 13-18 cm long. Short inflorescences are produced from nodes at the apex of the matured pseudobulbs, below the leaves. Each raceme bears 2-10 flowers, with several open at the same time. 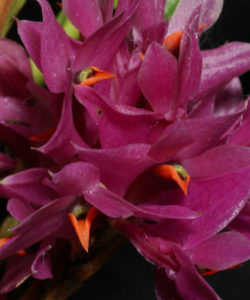 The showy flowers of Den. violaceum are 22-40 mm across and resemble a flared fan. Variable in colour, the flowers range from purple to bright pink-violet and may be light or dark. Its lip is greenish brown tipped with dark orange to muddy-violet with a bright scarlet apex. Long-lived, the blooms may last for up to 6 months or more. 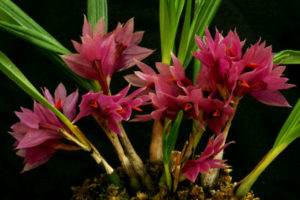 Widespread in New Guinea , Den. violaceum has been found from the west Nassau Mountains in West Papua (Irian Jaya) to Milne Bay province in southeast Papua New Guinea. Plants are usually found growing on the horizontal branches of rainforest trees between 750-2,000 m altitude.

An intermediate to cool-growing species, Den. violaceum requires a small container with a well-drained medium and about 70% shade. Plants can also be grown successfully on mounts but will need more frequent watering or misting. Maintain high humidity with good air circulation and water it regularly during the warmer months. Watering frequency should be reduced in winter, but plants should never be allowed to remain dry for long periods. I recommend a winter minimum of 12 oC.