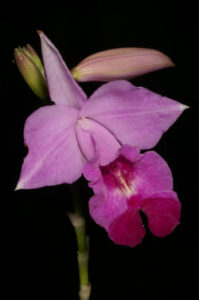 Arundina graminifolia (D. Don) Hochr. was first described by David Don as Bletia graminifolia in Prodromus Florae Nepalensis in 1825, based upon a collection from Nepal. The specific epithet was derived from the Latin gramineus (grass-like), and folius (leaf), referring to the leaves. Bénédict Hochreutiner transferred this species to Arundina in the Bulletin of the New York Botanic Garden in 1910. 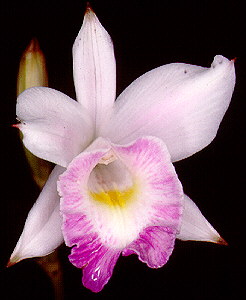 Variable in colour, the flowers of Ar. graminifolia are purple-red, pink, to flesh-coloured, or white. Its tubular lip is darker than the sepals and petals, often veined darker purple, and sometimes has a yellow to orange-yellow patch at the base. Generally, plants from higher altitudes have white flowers, while those from the lowlands have larger blooms that are pinkish to purplish-red. White flowers that have some yellow in the throat are rare, and have been found in Java. A peloric form in which the lip is replaced by a third petal, and has pure white flowers, is restricted to Sabah, Borneo. Short-lived, the faintly scented flowers last for about 3 days, and they open sequentially from the end of the raceme. Rarely are two blooms open at a time on the inflorescence. 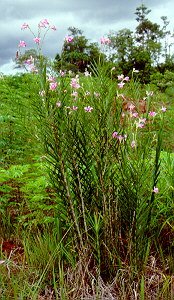 A very widely spread species, Ar. graminifolia is distributed from the Himalayas of Nepal, Sri Lanka, Thailand, Laos, Cambodia, Vietnam, southern China, Japan, Taiwan, and south to Peninsular Malaysia, and Java. It grows in tropical valleys, in a wide variety of habitats, between (200-) 400-2,160 (-2,800) m altitude. Often found along roadsides, or rocky places by steams, in open sunny situations, Ar. graminifolia is rarely encountered in shady forests. Some habitats include mixed forest, sometimes among bamboo, or tall grass, in scrub jungle, on sandy soil, and on open grassy slopes. Plants of Ar. graminifolia have become naturalised in the Pacific Islands and it is known to inhabit many areas in Hawaii.

During growth, Ar. graminifolia requires plenty of water, and light. In subtropical regions, Ar. graminifolia makes a good subject for the garden. If plants are growing well, they will bloom throughout the year. Cultivate it in a well-drained medium, with 50-70% light, high humidity, and good air circulation. Plants that are cultivated in low, or poor light conditions, often fail to bloom.