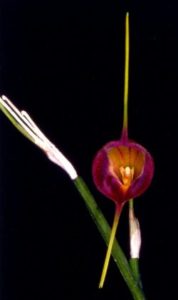 Alaticaulia echo Luer (Luer) was first described by Carlyle Luer, as Masdevallia echo in Phytologia in 1978. This species was given its name from the Greek mythological nymph, Echo who was known for her repetitious voice, in reference to the confusing similarity to Masd. infracta Lindl. Endemic to Central Peru, Altc. echo had been previously included as part of Masd. infracta from Brazil.

With the use of DNA data analysis, Carl Luer transferred Masd. echo to Alaticaulia, in Icones Pleurothallidinarum in 2006. A large genus, the species of Alaticaulia were previously included in Masdevallia subgenus Polyantha, section Alaticaules, section Polyanthae. Alaticaulia have thick leathery leaves, and multiflowered racemes, with a peduncle that is round, or triangular in cross-section. The flowers may be produced successively, or simultaneously. A cup, or tube, with tails, is formed by the joining of the base of the sepals. Usually the petals have a rounded basal callus, and a callus along the lower half.

Altc. echo is a medium, to large plant, which produces clustered. stout, erect ramicauls (pleurothallid stems) that are 1-2 cm long, which are enclosed by 2-3 tubular sheaths. Each ramicaul has a narrow, elliptical-oblong leaf, which is 10-20 cm long, and 1.8-2.8 cm broad. Erect inflorescences that are triangular in cross-section are produced from the base. They are 15-30 cm long, equalling, or surpassing the leaves. Several, single flowers are borne in succession at the apex. The flowers may be produced over several seasons, so don’t cut the inflorescences until they have yellowed, or withered.

The flower of Altc. echo has the dorsal sepal partially joined, along the basal half, to the partly joined lateral sepals, forming a sub-orbicular sepaline tube, or bell-shaped cup. The lateral caudae, or sepaline tails, are joined together. Olive green in colour, the sepals are suffused with red-purple, especially on the inner surface. The small, oblong, white petals are flecked with purple, and the oblong-subpandurate, white to yellow lip is spotted with purple.

Found in the Peruvian mount 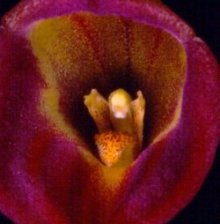 ains between 2,000-2,700 m altitude, Altc. echo is an intermediate, to cool grower, which seems to be somewhat warmth tolerant. Shading of 70-80%, high humidity, and good air circulation seem to be ideal. Altc. echo will survive hot subtropical summer conditions, if high humidity can be maintained, and air movement is good. Use of fans in summer may be helpful, if air movement is inadequate. A small pot with a well-drained, moisture-retentive medium is recommended. Fine bark, sphagnum moss, or a peat/perlite combination would all be suitable mixes. Regular repotting each year, or at most, every two years, will ensure that the root system is kept happy. In winter, plants can be kept somewhat drier, but need to be kept evenly moist at the roots. A minimum of 12 C is recommended for winter.