The following article was written for the Orchid Species Bulletin published by the Orchid Species Society, which is based in Brisbane, Queensland in December 2011.
Bear in mind that any cultivation notes refer to the sub-tropical conditions of Southern Queensland, Australia.

Ascocentrum garayi Christenson was only described by Eric Christenson in Lindleyana in 1992, despite being in cultivation for many years. Christenson named it in honour of Leslie Garay, former curator of the Orchid Herbarium of Oakes Ames at Harvard University, for his work on restructuring the generic limits within the Aëridinae.

Its leaves are longer and also often recurved like those found in Asctm. curvifolium (Lindl.) Schltr. and Asctm. rubrum (Lindl.) Seidenf. Asctm. garayi on the other hand, flowers in spring and is distributed from Laos, Vietnam and Thailand. It has an obtusely rounded, strongly concave lip mid-lobe that is at 90o to the straight, cylindric spur. In addition it has shorter leaves that are rigidly straight. The leaves of Asctm. garayi are often spotted with red or purple. 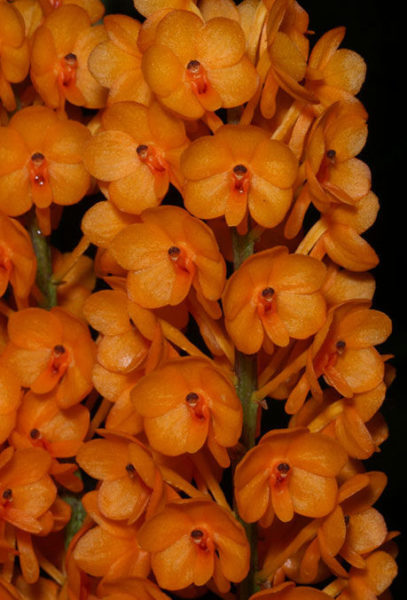 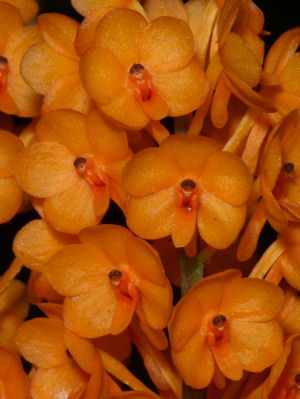 Asctm. garayi is a compact to medium-sized monopodial plant that has stout, erect stems that are 15-25 cm or so tall. The stems are covered at the base by persistent, overlapping leaf-bases. Mature plants produce new growths from the base so that multi-growth specimen plants will eventually develop. At the apex of the erect stems are several pairs of two ranked, strap-shaped leaves that are cleft or two-toothed at the apex. Its mid-green, thickened, very rigid leaves are 5-25 cm long and 1-1.4 cm broad and are usually spotted with red-purple on the upper surface.

Each stem produces several, erect axillary inflorescences that are raised above the leaves. The racemes are up to 24 cm long and bear many (up to 40) densely arranged, showy flowers in a sub-cylindric raceme. The flowers of Asctm. garayi are brilliant golden-orange and are 1-1.5 cm across with broad sepals and petals and a spurred lip. Contrasting with the rest of the flower is the dark red-brown anther cap on the end of the short terete column. 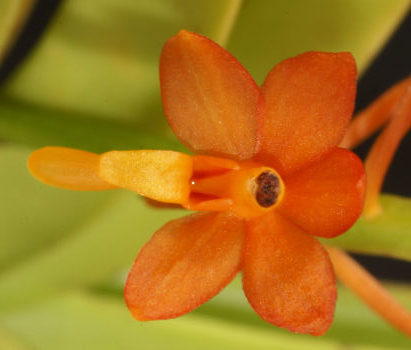 Grow Asctm. garayi in a basket or pot using a coarse or well-drained medium. Its thick white roots seem to like to dry quickly between waterings. During the warmer months ensure that the humidity is high, with constant air circulation at all times. Provide it with 60-70% shade with plenty of water while the root tips are green. Applications of liquid fertiliser will also be beneficial while it is actively growing. In winter, a drier rest period with a minimum of 12oC is important to help initiate flowering in late spring.